Eliminated from postseason contention, the Washington Commanders (7-8-1) are reshuffling the quarterback deck one last time to close out the 2022 season.

Washington is expected to play both Taylor Heinicke and rookie Sam Howell under center Sunday against the Dallas Cowboys (12-4), NFL Network Insider Mike Garafolo reported on Wednesday. This week’s game will mark Howell’s first regular-season action since being selected in the fifth round of the 2022 NFL Draft. Meanwhile, Carson Wentz will likely be inactive for the season finale.

Much was made of Ron Rivera’s decision to swap out Heinicke for Wentz ahead of last week’s game against the Browns, with Washington barely clinging to a wild-card spot and the head coach feeling like the team needed “a spark.” Wentz had missed roughly two months after suffering a fractured finger, with Heinicke filling in dutifully and leading Washington to a 5-3-1 record in his nine starts. When Wentz initially returned from injured reserve ahead of Week 15, Heinicke retained his role as starter. But then the Commanders dropped two in a row, with Wentz replacing Heinicke late in Washington’s Week 16 loss to San Francisco and producing a touchdown drive. Rivera proceeded to name Wentz the Commanders’ starter for Week 17 with Washington’s playoff hopes hanging in the balance.

In his first start back, Wentz flailed, completing 16 of 28 passes for 143 yards with three interceptions in a 14-point loss to Cleveland. Washington mustered just 10 points on 10 drives, and with the loss — plus Lions and Packers wins — the Commanders were eliminated from postseason contention.

Rivera wouldn’t commit to Wentz or a QB change immediately following the Week 17 defeat. But now, with nothing to lose in Week 18, the Commanders are taking a hybrid approach to the game’s most important position.

Heinicke returning to the fold in Washington’s final game could spell the end for Wentz in D.C. The veteran quarterback joined the Commanders via trade from Indianapolis last offseason. Wentz has two years remaining on his deal, but with no guaranteed money. Wentz could be traded again this offseason, but with cap numbers north of $26 million in each of the next two seasons, the 30-year-old could be a prime cut candidate.

Though Washington’s season officially ends on Sunday, the Cowboys still have plenty to play for. Dallas can clinch the NFC East title with a win over Washington and an Eagles loss to the Giants. Add in a 49ers loss to the Cardinals, and Dallas claims the No. 1 seed in the NFC playoffs. If the Eagles win or Cowboys lose, however, Dallas will be the NFC’s No. 5 seed and play at the Tampa Bay Buccaneers on Super Wild Card Weekend.

In the first meeting between Washington and Dallas, Wentz and the Commanders lost to the Cooper Rush-led Cowboys, 25-10, at AT&T Stadium. This time around, it’ll be Heinicke and Howell going up against Dak Prescott at FedExField. 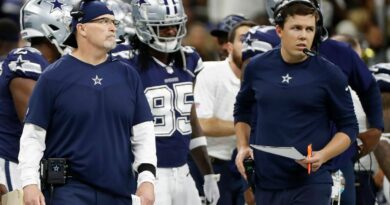