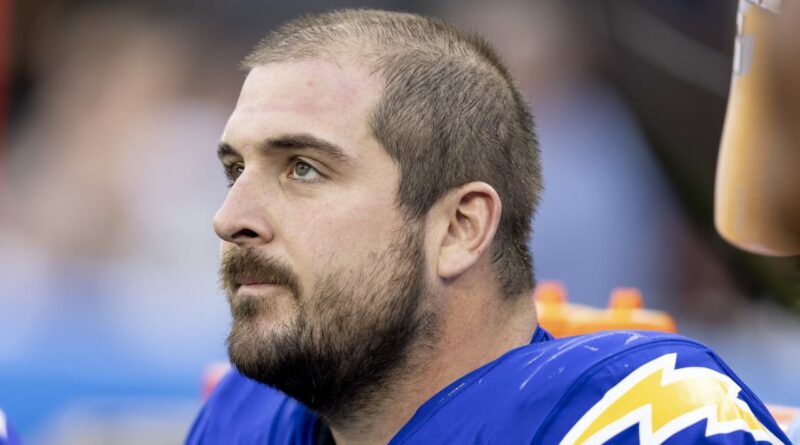 In March, Corey Linsley and his wife, Anna, packed up their things in Green Bay, Wisconsin and moved more than 2,000 miles away to Los Angeles.

Corey had signed a contract with the Chargers that made him the NFL’s highest-paid center after spending the first seven seasons of his career with the Packers. The Linsleys had one child and another on the way. And they were living through a pandemic.

Despite everything changing so quickly around them as they traded in snow for palm trees, one of the first things they thought was, “How can we help our new community?”

That mindset exemplifies why Corey has been selected as one of the 32 nominees for this year’s Walter Payton Man of the Year Award.

“I was like seven months pregnant,” Linsley’s wife, Anna, said last week. “I followed CASA Orange County and CASA L.A. on Instagram those first few days I was out here. I think that’s just part of who we are. I think that helps keep your life well-rounded and helps keep us grounded.”

Giving back is nothing new for the Linsleys. During their time in Green Bay, they supported Court Appointed Special Advocates (CASA) of Brown County (Wis.), a volunteer-based nonprofit organization that, as the group’s website puts it, recruits, trains and supports “citizen volunteers to advocate on behalf of children under court protection until they are safe and thriving in permanent homes,” providing “a voice for abused and neglected children who are under the legal protection of the court system.” And there was no question that the work the Linsleys did with CASA there would continue in their new home.

“I think the thing that hit home for us with CASA was listening to the advocates and the people involved in CASA from all around the country,” Corey said. “Hearing their testimonies and how they really changed kids’ lives, who barely know the meaning of trust and are born into a world where they didn’t choose. They just got dealt a bad hand. To be able to make a direct impact on these kids’ lives is really what sold us on CASA and why we went all in.”

Between their own pledge to donate $30,000 and donations from the fans and the Chargers, plus $25,000 that Linsley could donate as part of being nominated, $100,000 in total will go to CASA Los Angeles and CASA Orange County. The Linsleys have also committed $20,000 to the Chargers’ Impact Fund to be used for the “Community Corner,” which is a program that provides complimentary tickets for Chargers homes games to youth and community organizations.

“It’s such a unique position that we’re in,” Corey said. “We worked hard to get here, but not everybody even has this opportunity. For us to have the platform and the financial aspect of it all to give back like this, we do feel like it’s part of our duty to do it and to be involved in the community. I’m lucky to have my wife really leading the charge on that. It takes so much time, it takes so much effort by everybody involved. I’m lucky that we both feel that way.”

This is the second Walter Payton Man of the Year nomination for Corey, whose first came in 2020 with the Green Bay Packers.

“It meant a lot to me,” he said. “It’s an honor. I think to me it meant more to the people involved with CASA.”

For Linsley, it’s never been about seeking recognition — he and his wife perform the role of CASA advocates themselves, and they often will not immediately tell the kids they’re working with who Corey is.

“I really think they came to know us as Corey and Anna,” Anna said. “I know that was what we wanted. Obviously, it was a really exciting thing for them once they found out. I think it showed them that someone that they think is really important thinks they’re important too.”

Linsley’s stature within the NFL is clear. He began his career blocking for Aaron Rodgers, helping the Packers QB win a pair of MVP awards while claiming All-Pro honors himself in 2020, then inked a five-year, $62.5 million deal with the Chargers that reflects his reputation as one of the best at what he does. Though Frank Ragnow ($13.5 million) has since eclipsed Linsley’s per-year average ($12.5 million), no other center is signed to a deal worth more in total, per Over The Cap.

“Our main profession is to play football,” Corey said. “We’re giving back and paying forward and all that. But the real men and women of the year are the men and women that are involved in CASA. The advocates that are doing, on a daily basis, doing things to improve these kids’ lives and these families’ lives. I was happy they could get publicity from that.”

Linsley’s role with the Chargers now is to protect second-year quarterback Justin Herbert, and he’s excelled at that. Herbert needs just 39 passing yards to break Andrew Luck’s record for most passing yards in a player’s first two seasons in the NFL. And Linsley has not allowed a single sack in 2021. Pro Football Focus has given him an overall grade of 84.2, which is the third-highest among the 38 centers with 250 or more snaps this season.

“It’s been awesome,” Corey said. “Justin is such a high-character, great dude. I was very fortunate to learn from Aaron and work with him for seven years. Everybody knows how phenomenal of a player he is and how intelligent he is. My role coming here, my main thing was, how can I help out? How can I help you grow? I’m trying to be of service in any way possible.”

And, of course, that approach has translated to the community at large.

“I was stunned because I didn’t think you could get it more than once,” Anna said, of Corey’s repeat nomination. “I think it’s different, because I think that in Green Bay, he got it his last year there; sometimes it takes a while to be recognized. Here, they just saw what kind of person Corey was right away. He is a new guy in the locker room. He’s obviously a veteran, but the fact that the community outreach team and those who select the nominations thought that highly of him so quickly, it kind of floored me.”

While Corey Linsley said winning this award would be great, in terms of the acknowledgement and publicity it would bring to CASA, he still sees being nominated as a significant accomplishment for him and the other 31 nominees.

“I always remind him, I’m of course proud of what he does on the field, and I know how hard he works,” said Anna. “I’m more proud of the person that he is off the field. I hope that in 10 years, when my kids are looking through a photo album, if we even have those things, I hope the thing that they take away from their dad’s legacy in the NFL is that he cared for others and he gave back to his community. He took the time to help those in need. I hope that it’s a lesson for them to continue that legacy.”

The winner of the 2021 Walter Payton Man of the Year Award will be selected from a field of 32 nominees, one from each team, and announced at the 11th Annual NFL Honors, broadcast live on ABC on Thursday, Feb. 10 at 9 p.m. ET, and simulcast on ESPN+ and NFL Network.

Sources: Spagnuolo the favorite to be Chiefs DC