The Cowboys (6-6) and Bears (6-6) will square off in the Week 14 edition of Thursday Night Football. The Cowboys are 3-6 in their past nine games, have lost three of their past four but are still clinging to an NFC East lead. The Bears are 3-5 in their past eight games but have won their past two contests and are coming off of a gritty 24-20 win over the Lions on Thanksgiving. They’ve gone just 3-9 against the spread, though. Per BetQL’s Public Betting Dashboard as of Thursday morning, 63 percent of public bets have gone on the Cowboys at -3 on the road.

Due to the fact that the Cowboys are leading their division, they’re currently slotted as the fourth seed in the NFC playoff picture while the Bears are on the outside looking in (since they’re well behind the Packers in the NFC North and both NFC wild card teams). While a loss wouldn’t be season-ending for the Cowboys, it would essentially eliminate Chicago’s playoff hopes.

You can find all updated NFL point spreads, odds and lines at BetQL!

Ah, it’s that time of the year. The holidays are approaching, Jason Garrett is on the hot seat, and Cowboys fans are wondering why their team is no longer thought of as a legitimate Super Bowl contender. After getting off to a strong start and being praised as the most dangerous offense in football early on, Dallas has essentially fallen off the map, losing six of its past nine games overall and only clinging onto a lead in the NFC East lead because all of the other teams in the division are underperforming (and under .500).

That star-studded offense led by Dak Prescott, Ezekiel Elliott, Amari Cooper and an elite offensive line produced just 15 points at home against the Bills last week and nine the week before against the Patriots. However, Prescott went 32-of-49 for 355 yards, two touchdowns and an interception last week while Elliott ran for 71 yards on 12 carries and hauled in seven catches for 66 more yards. Cooper caught eight passes for 85 yards but failed to find the end zone. The week before, Cooper was shut out for no catches against the Patriots while Prescott couldn’t get anything going and Zeke rushed for 86 yards on 21 carries.

While those three players, especially Elliott, are considered All-Pro caliber, the concentrated nature of Dallas’ offense might have caught up to them, as defenses can spend most of their attention limiting Cooper and Elliott. Zeke hasn’t scored a touchdown in four of his past five games and will have his hands full against a Bears defense that ranks seventh against the run, allowing 97.5 rushing yards per contest. Defensively, the Cowboys have been a decent unit, but they just allowed Josh Allen to complete 19-of-24 passes for 231 yards and a touchdown in an uncharacteristically-efficient outing. That’s certainly not a great sign.

Luckily for the Cowboys defense, they get to face a Bears team that has produced an average of 16.7 points per game over their past six contests. Although Mitchell Trubisky threw for 338 yards and three touchdowns out of nowhere in Chicago’s Thanksgiving Day win over the Lions, he’s been a disappointment all season, as has the entire Bears offense. Chicago ranks 27th in points per game (17.7) and has essentially spoiled the hard work that its defense has put forth, surrendering just 17.3 points per game (which ranks fourth). One has to wonder what Chicago’s record would be with a more consistent quarterback under center.

Not only has Chicago gone 3-5 over their last eight games SU, but it’s gone a ridiculous 1-7 ATS in that span. Trubisky could have an especially difficult time passing in this contest, since the Cowboys rank eighth in passing yards allowed per game (215.2). Rookie running back David Montgomery will look to attack Dallas’ league-average run defense that’s surrendered 106.4 yards per contest, while Allen Robinson II has been the bright spot in Chicago’s offense from an individual production perspective. He, along with Anthony Miller (who broke out last week), will have to have a strong outing in this contest if the Bears expect to consistently find themselves on Dallas’ side of the field.

The Cowboys are favored by three points on the road and the over/under is listed at 43. Via BetQL’s Sharp Picks Dashboard, the overwhelming majority of the money has been wagered on one side ATS. The Cowboys’ -160 moneyline is listed as the best bet in BetQL’s model, which is an indication that the data suggests Dallas will win the game. 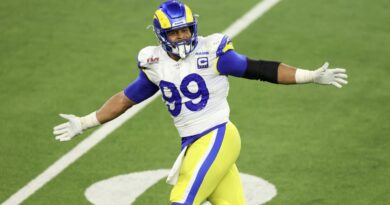 Aaron Donald says he'll return if Rams bring back Odell Beckham, Von Miller: 'We bring everybody back, I'm back' 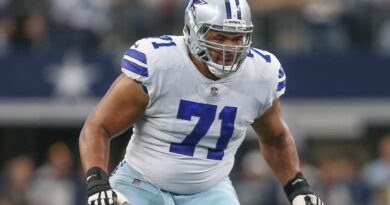