The Cowboys have set the table for a kicking competition this summer.

With Jonathan Garibay the only other kicker on the roster, Hajrullahu will compete with the undrafted rookie for the starting job during Cowboys training camp. The Cowboys released veteran Greg Zuerlein this offseason after two seasons with the team.

Hajrullahu made his NFL debut with the Cowboys last season, appearing in one game for an injured Zuerlein but didn’t attempt a field goal. The 32-year-old made all five of his extra point attempts in the Week 2 blowout against the Falcons. Hajrullahu made his way to Carolina by season’s end, appearing in the final three games of the 2021 season for the Panthers and making four of five field goals.

Hajrullahu made his way to the NFL following a successful career in the Canadian Football League. Aside from being one of the CFL’s more reliable kickers during the 2010s, Hajrullahu booted the game-winning field goal to secure the Grey Cup for the Toronto Argonauts in 2017.

Cowboys training camp is scheduled to begin on July 26. 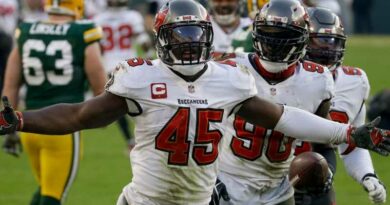 Redskins' Alex Smith out of hospital, back home

Patterson apologizes for ‘unacceptable’ use of slur