On Saturday, July 30, NFL Network will present Training Camp: Back Together Saturday. Beginning at 9 a.m. ET, more than 50 analysts, reporters and team correspondents will provide 13 hours of live coverage from training camps across the NFL — plus, check out NFL Films-produced wired sound of players and coaches in action.

Looking to bolster their wide receiver depth, the Dallas Cowboys are adding the USFL’s top player.

Turpin, 25, had a breakout showing in the USFL as a receiver and kick returner for the New Jersey Generals.

The USFL leader in receiving yards (540) on just 44 receptions, Turpin also led the resurrected league in yards after catch (316). Turpin had four receiving touchdowns, the league’s only punt return for a score and a league-best 15.3 yards per punt return.

Turpin played four seasons at Texas Christian University and will now look to earn a spot on his first NFL roster.

Dallas’ receiver room is currently led by CeeDee Lamb and includes Michael Gallup, who’s on the physically unable to perform list, James Washington, rookie Jalen Tolbert and a host of others who will be competing with Turpin for a spot on the final 53.

The Cowboys released fullback Nick Ralston in a corresponding move. 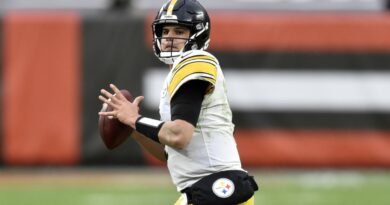 Mason Rudolph wants to be with Steelers, not concerning himself with anything beyond 2021