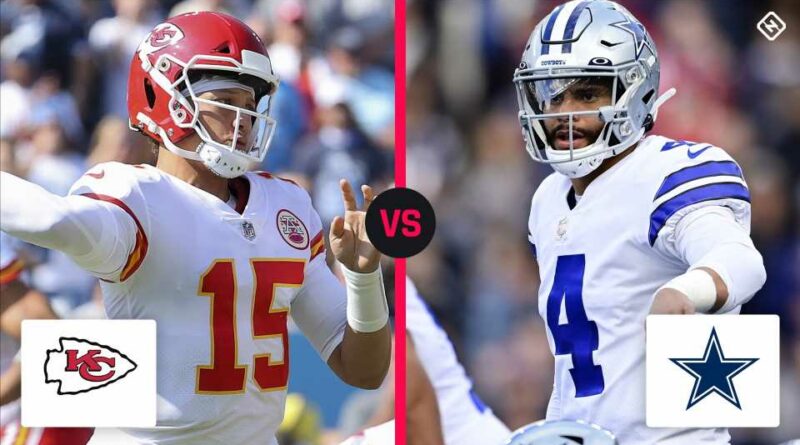 When the Cowboys (7-2) face the Chiefs (6-4) in the marquee late afternoon Sunday game of NFL Week 11 (4:25 p.m. ET, Fox), the spotlight will shine on the two quarterbacks. Dak Prescott is looking like the runaway Comeback Player of the Year with his stellar play in Dallas’ explosive and versatile offense. After a few snags, Patrick Mahomes is back on track commanding Kansas City’s dangerous all-around attack.

The scoreboard should be lit up with Prescott and Mahomes at the controls, helped by their elite supporting offensive skill players. Each side also has great coaches calling the shots, with Mike McCarthy and Kellen Moore matching wits with Andy Reid and Eric Bieniemy.

Which team will outlast the other with little defense being played?

Here’s everything to know about betting on Cowboys vs. Chiefs, including updated odds, trends and our prediction for the NFL Week 11 game.

WEEK 11 NFL PICKS: Against the spread | Straight up

The Chiefs are in essence playing a “pick ’em game” against the Cowboys, with not even the full field goal given as part of home-field advantage. The Cowboys and Chiefs are both coming off strong get-well games for their explosive offenses, and the defenses have enough holes to make the game very tough to call.

The Cowboys lead the limited series 7-4. The Chiefs used to be called the Dallas Texans for the first three seasons of their existence through 1962. These two teams starting playing back in 1970. The Cowboys won the 2017 meeting in Dallas, 28-17. They have won 3 of 4 and 5 of 7 in the series to jump ahead after the series was even early.

—68 percent of spread bettors are siding with the Chiefs to win by a field goal or more at home despite the Cowboys being a strong NFC opponent.

—67 percent of over/under bettors don’t think the massive number well above 50 is high enough and think the game will exceed that point total.

The Chiefs went into Week 11 as the NFL’s No. 18 run defense, allowing on average 114.6 rushing yards per game. The Cowboys need to try to stay balanced knowing they can get good supplemental production for Prescott with Elliott and flashy backup Tony Pollard. That will help set up play-action big pass plays, keep the chains and clock moving and limit Mahomes’ possession time in the process.

The Cowboys have good linebackers led by rookie Micah Parsons but their tight end coverage has been suspect because of weak safety play. Kelce is the most reliable target for Mahomes because his athleticism, size, hands and routes allow him to be schemed open well in most weeks. This feels like a big Kelce game especially if the Cowboys protect against being burned on a shot play to a wide receiver.

Speaking of wide receiver, the Cowboys will do their best to keep Tyreek Hill from going off with his downfield speed. Diggs has been the Cowboys’ best cornerback, making consistent plays on the ball and they might hope he can somewhat contain the “Cheetah.” Diggs will be lurking hoping to pounce on any Mahomes mistakes, but the Cowboys would be better off double-teaming Hill and Diggs handle everyone else.

112.2. That’s the passer rating allowed by Diggs when quarterbacks target him in coverage. Although Diggs has 8 interceptions, he also has been burned for his share fo big plays against him, which should please Mahomes when he reads the field and sees Diggs have a downfield lapse or two.

The Cowboys and Chiefs are destined to play a final-possession game and perhaps the best game of the entire more lackluster than blockbuster 2021 NFL season. Prescott and Mahomes need to first avoid mistakes, but they should both get in a groove as young guns. The Chiefs have learned to be balanced and explosive at the same time like the Cowboys have been trying to do. Had his game been in Dallas, it would be easy to side with the Cowboys. Likewise, in loud Kansas City, go with the home team in one of the season’s most even matchups.