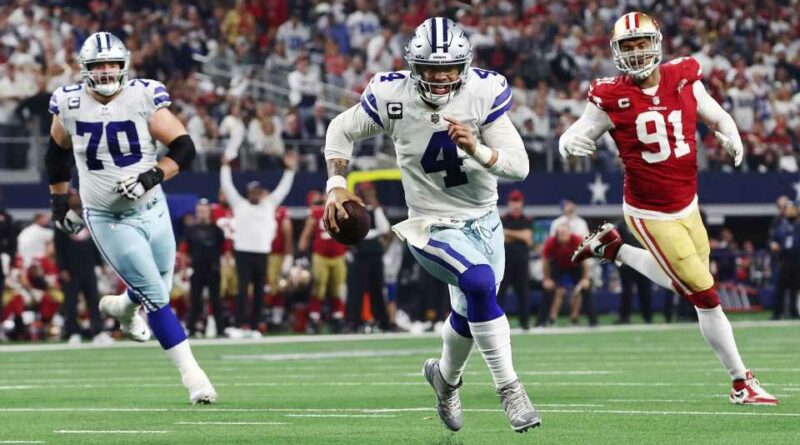 Dak Prescott didn’t exactly light up the 49ers on Sunday.

The Cowboys quarterback completed just 23 of 43 passes for 254 yards with a touchdown and an interception, and he rushed four times for 27 yards and another score. The performance wasn’t enough for Dallas to advance past San Francisco in the wild-card round as the 49ers won 23-17.

But it was enough for Prescott to win a prestigious honor. He was named the game’s NVP by Nickelodeon during its telecast of the matchup.

Last year, when the Bears lost 21-9 to the Saints, Chicago quarterback Mitchell Trubisky was named the NVP. Trubisky completed 19 of 29 passes for 199 yards with a touchdown and no interceptions.

The award is voted on by fans, which might explain why it has yet to be received by the quarterback of a winning team in the playoffs. It was also given to players during the regular season, with the voting more often reflecting the on-field success of the recipients.

Prescott has received the honor before. In Week 4 of the regular season, he was voted the NVP after completing 63.6 percent of his passes for 188 yards and four touchdowns in a 36-28 win against the Panthers.

But taking home the honor in the postseason carries a bit more weight. Trubisky’s Pro Football Reference page makes reference to it, next to his lone Pro Bowl honor.

Now Prescott will be able to add his NVP to the top of his page, next to his two Pro Bowl selections and Associated Press Offensive Rookie of the Year honor.

Fantasy RB PPR Rankings Week 2: Who to start, sit at running back in fantasy football