Home » NFL » Darren Waller: Henry Ruggs is as fast as a roach when the lights turn on

Speed comes in all kinds and comparisons.

And first-round pick Henry Ruggs has it and he’s showing it off from the start at Raiders training camp, drawing acclaim and comparisons in the process.

“He’s fast,” Raiders tight end Darren Waller told the media on Friday. ” I remember one of my friends, we were watching the draft together – or it was the combine – and we saw Henry Ruggs run his 40 and he was like, ‘It was like a roach when you cut the lights on, he just got to skatin,” but it’s as advertised or even crazier in person.”

At this past NFL Scouting Combine, Ruggs turned in the year’s best time of 4.27. Perhaps most notable was that it was seen as a disappointment to some considering many believed he could run past John Ross’ combine-record of 4.22.

“It looks effortless, I know it’s not,” Waller said of Ruggs’ blazing speed. “I haven’t seen anything like it.”

Waller is coming of a phenomenal season, producing stats to announce himself as one of the top tight ends in the league. Having a burner like Ruggs figures to open up opportunities even more for Waller or at the least prevent the added attention from opposing defenses that last year’s showing was sure to beckon.

Big plays are an aspect that’s been missing from a Silver and Black squad once characterized by them. Thus far, Ruggs’ fleet feet have been as extraordinary as publicized, and the Raiders are hoping the first-rounder’s promise finds its footing just the same. 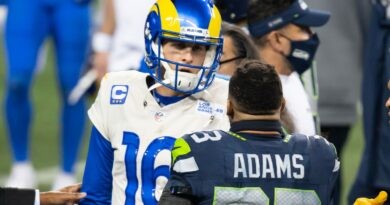 How conference title games could inject chaos into CFP rankings