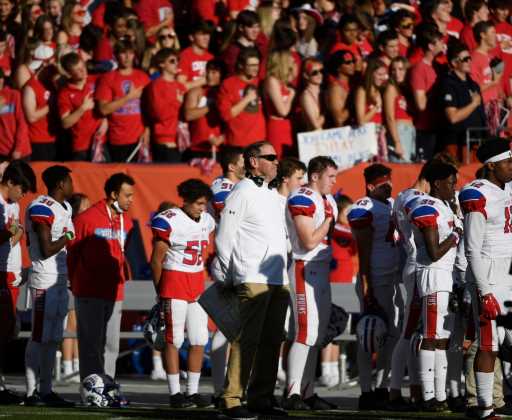 Cherry Creek tackle George Fitzpatrick snuck up, as much as 6-foot-6 and 285 pounds can sneak, and tried to empty a cooler of water over coach Dave Logan’s head.

One problem: Logan hopped out of the way at the last second. The Bruins’ football coach got conked on the head and a stream of H2O ran down the front of his white shirt.

“Supposed to put in the back of me,” Logan chuckled as he shook himself off and went back to Creek’s 21-0 win over Valor Christian in the Class 5A state football championship game. “Instead, he jammed (the cooler on) my head.”

“Didn’t know I did that,” Fitzpatrick, who’s committed to Ohio State, admitted later. “I have to apologize, then. That’s my fault, if I did. That’s on me.”

No worries, kid. At 67 years young, Logan still doesn’t miss a trick. Or a celebratory bath.

Saturday’s title at Empower Field at Mile High was his second three-peat as a high school football coach in Colorado over the last 15 years and his 10th state title, tying him with Limon’s Lloyd Gaskill for No. 1 all-time.

“It’s so rewarding, because we had so many injuries this year,” Logan said, rattling off the obstacles. “We lost our starting running back, our starting left tackle, a tight end …”

For Logan, whose engine never rests, sleep came harder in 2021. His mother, Etha, passed away this past January at the age of 93. This coming off a 2020 campaign — COVID, starting, stopping, starting again — that took both a mental and physical toll.

“(Retirement) entered my mind,” the voice of the Broncos and former Wheat Ridge/CU star said.

“But I love working with kids. And I love coaching football. And I think — I know — there will be some things that I probably will give up, relatively soon.”

“But it will not be coaching.”

“It will not be coaching.”

Logan soldiered through Saturday, the first title game without Etha — “probably my best friend,” the coach said — watching from the stands. Mom was on hand for the first nine. Arvada West. Chatfield. Mullen. Creek.

“So it gives you a little perspective on things, right? I really enjoyed this trip with these kids.”

And what a trip. The Bruins were supposed to be here and yet sort of … weren’t. At least, not based on what the scouting reports told us back in August.

Not after losing 35 seniors from the back-to-back champs of ’19 and ’20. Creek returned three starters on offense and only one on defense. Logan’s Bruins don’t rebuild, mind you. But this was the mother of all reloads.

“I think there were times this season that a lot of people counted us out,” Logan said. “So my message to the kids was, ‘Let’s just keep working, keep chopping wood, and we’re going to be playing our best football once we get to the playoffs.’”

Which, of course, they did. The Bruins started the postseason by blanking Mountain Vista, 34-0. They stomped a good Legend team by 28 in the semis. Then they handed Valor, which came into Saturday averaging 43 points a game since Oct. 1, its first shutout of the year. And first defeat.

KEEP WHAT’S OURS, the Creek banner in front of the tunnel read, just before the Bruins ran it over.

“Nobody believed it,” Bruins running back Carlson Tamm said, gleefully, as he ran up to Logan after the game. “We’re average.”

They weren’t. Not by a long shot. The Eagles brought all-world tailback Gavin Sawchuk to the party. Creek brought a hammer.

The tempo was set on the third play, when Blake Purchase, Logan’s wrecking-ball linebacker, shot off the edge and batted away a third-down Colton Allen pass, forcing an Eagles punt.

Of Valor’s first eight possessions, two ended with Bruins interceptions. Creek swarmed Sawchuk, the Oklahoma commit and consensus top player in the state, and dared Allen to beat them with his arm. Once Henry Lamar returned a pick-6 at the end of the first quarter for a score and a 13-0 Creek lead, it was obvious that Allen wouldn’t.

Of Logan’s 10 titles, this one might have been the most gratifying. On several fronts. Creek’s champs last year were stocked full of stellar seniors, including Chase Penry (now at CU), Gunnar Helm (Texas) and Arden Walker (Missouri). If 2020 felt like a slog, this one felt special.

“It’s definitely been a hard year for Coach Logan,” Fitzpatrick said. “My heart goes out to him. But I’m sure (this) kind of got his mind off of that and to kind of thinking about something good. So that’s great for him.”

“I had calls this (last) week from guys from Arvada West, guys from Chatfield, guys from Mullen,” Logan said. “You sort of step back, which I did this week, and say, ‘Man, it’s been 29 yeas and there have been some special moments.’

“They’re all uniquely special when they happen, so there’s not one that’s better than the other. But this one’s special. For sure.”