KANSAS CITY, Mo. — If this is it for Demaryius Thomas, he’ll go down ranked second to Rod Smith in every significant receiving category among all wide receivers in Broncos history.

“I guess they don’t want me to break the record,’’ Thomas said with a laugh.

The people spoke on condition of anonymity due to the sensitivity of the discussions.

Thomas, however, might be moved. He turns 31 on Christmas Day. His production has slipped, especially in yards per catch. He already has his heir apparent ready in rookie Courtland Sutton, who had three catches for 78 yards Sunday in a 30-23 loss to the Kansas City Chiefs while Thomas had three catches for 30 yards.

And Thomas has a prohibitive $14 million in 2019 salary left on his contract.

If the Broncos were to release Thomas after this season in lieu of the $14 million and to clear playing time for Sutton, he would not meet the type of free agent classification that would net a compensatory draft choice for the Broncos when he signs with another team.

So, if the Broncos want to get a draft pick in the second- to fifth-round range in return for Thomas, their only chance is to deal him by the 2 p.m. trade deadline on Tuesday. Just because Elway receives offers for Thomas, though, doesn’t mean he’ll go through with trading him.

It won’t be an easy decision because Thomas has been a great Bronco. An all-time Bronco who will go into the team’s Ring of Fame one day.

He’s been with the team since he was their first-round draft choice in 2010. He and Tim Tebow hooked up on one of the most iconic and enthralling plays in Broncos’ history – an 80-yard catch-and-run on the first play of overtime to stun the heavily favored Pittsburgh Steelers in a 2011-season playoff game that shook the Mile High city into a yell-from-the-balconies, foot-stomping tremble.

“D.T.’s the best,’’ said current Broncos quarterback Case Keenum. “He’s a pro. I actually love being around him. I love being his teammate. I’m honored to be his teammate. He’s got to be the best Broncos wide receiver in history, right?’’

Probably in the top two, along with Smith, and indisputably in the top three as Lionel Taylor from the 1960s is also in the discussion. Thomas was asked to predict whether or not he would be traded.

Had the Broncos beat the Chiefs, Thomas said he probably would not get traded. The Broncos at that point would have been 4-4 and back in the playoff race.

But now they are 3-5. The 7-1 Chiefs are way too far gone in the AFC West. The Broncos would likely have to finish 7-1 just to get a wild-card spot. With home games against the Texans, Steelers and Chargers, and road contests with the Bengals and Chargers, it doesn’t appear the Broncos have 7-1 in them.

Elway has to start thinking about getting in position to make a legitimate playoff run in a year or two.

The 48-hour trading period has arrived with the Broncos mired the seller’s market.

Besides Thomas, linebackers Shane Ray and Brandon Marshall could also be available for trade.

Thomas has been the subject of trade speculation since an ESPN report last Sunday. He was asked after the Chiefs game this Sunday if anyone from the team brass should have talked to him about the trade possibility.

“I think it should have never got out, to tell you truth,’’ Thomas said. “I would never have to think about it, no one would be talking about it.’’

He talked Wednesday to the press about how he feels about being trade bait. And he talked about it again after another tough loss Sunday to the Chiefs.

Still, he said he hasn’t had much trouble sleeping and he’ll snooze well these next two nights. Maybe, he’ll wind up with the New England Patriots. He’s played well against Bill Belichick’s team. Or maybe he’ll be on the Philadelphia Eagles, who reportedly made an offer for Amari Cooper before he was traded to Dallas last week.

Those were the two Super Bowl combatants last season.

How would he view another team compared to the only one he’s known?

Now that’s the outlook of a pro.

KUSA is a TEGNA station. 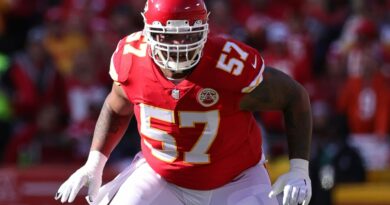