Week 14 of the 2018 NFL season witnessed a feat 35 years in the making and a performance that left Dallas Cowboys owner Jerry Jones feeling even better about his midseason trade acumen. Here are the NFL Players of the Week:

Derrick Henry is the AFC Offensive Player of the Week for his phenomenal performance in the Tennessee Titans’ 30-9 victory over the Jacksonville Jaguars on Thursday Night Football. Henry finished the game with an Oilers/Titans franchise record 238 rushing yards, and his four touchdowns tied a franchise record. His most impressive feat came on a stiff-arm-tastic 99-yard touchdown run that tied Tony Dorsett’s 1982 season mark for longest scoring run in NFL history.

Denico Autry is the AFC Defensive Player of the Week after playing a decisive role in helping the Indianapolis Colts upset the Houston Texans, 24-21. The defensive tackle played a key role in keeping Texans quarterback Deshaun Watson under control, recording a pair of sacks in addition to four tackles. Autry has five sacks in the last two games and has proven to be general manager Chris Ballard’s best offseason signing.

Michael Badgley booted his way into the Los Angeles Chargers’ record book en route to earning AFC Special Teams Player of the Week honors. The rookie kicked a 59-yard field goal in the first half of the Chargers’ 26-21 victory over the Cincinnati Bengals, the longest field goal in franchise history. He also made field goals of 45, 32 and 31 yards and hit both of his extra-point attempts to provide more than half of Los Angeles’ point total.

Amari Cooper had his best game in a Dallas Cowboys uniform — so far — on Sunday to earn NFC Offensive Player of the Week. Cooper caught 10 passes for a whopping 217 yards and three touchdowns to help spur the Cowboys to a 29-23 overtime win over the rival Philadelphia Eagles. Since acquiring Cooper from the Oakland Raiders ahead of the trade deadline, the Cowboys are 5-1 and in prime position to claim the NFC East crown.

Big play Darius Slay lived up to his reputation as one of the NFL top cornerbacks during the Detroit Lions’ 17-9 win over the Arizona Cardinals. Slay’s 67-yard pick-six off Josh Rosen in third quarter annihilated the Lions’ eight-game losing streak in Arizona and allowed him to haul in NFC Defensive Player of the Week. Slay also tallied three tackles and three passes defensed.

Playmaking pocket knife Taysom Hill is the NFC Special Teams Player of the Week due, in part, to his momentum-shifting blocked punt during the New Orleans Saints’ 28-14 victory over the Tampa Bay Buccaneers. Hill’s block on punter Bryan Anger in the third quarter came with the Saints trailing, 14-3. After Dwayne Washington recovered the loose ball on the block, the Saints scored touchdowns on their next three possessions to clinch their second consecutive NFC South division title. 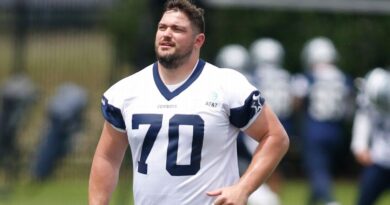