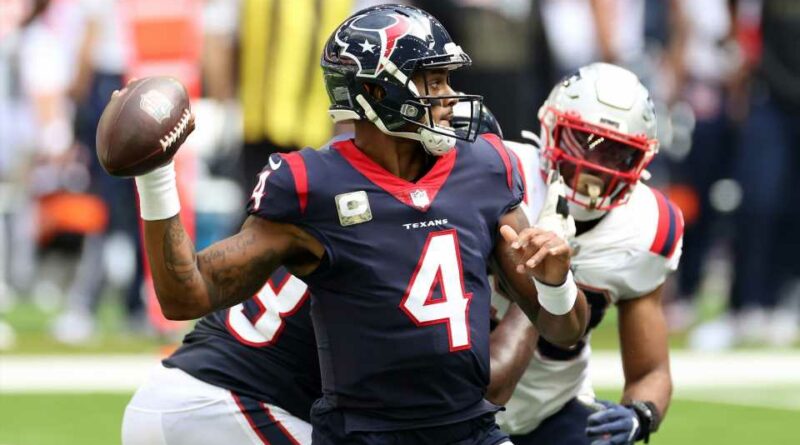 The Texans haven’t had a good year of making franchise quarterback Deshaun Watson happy, despite giving him a 4-year, $156 million contract extension right before the 2021 season. It started last March when they traded his go-to wide receiver Deandre Hopkins to Arizona. And it may end with Houston trading Watson himself.

The Texans appeased Watson a bit in removing now former offensive-minded general manager/ coach Bill O’Brien during the season — resulting in the best statistical performance of his career. But they have reportedly made him more upset by not committing to diversity in their process of hiring a new GM and coach.

The Texans named Nick Caserio — another former Patriot, their former director of player personnel — as GM earlier in the week. They also reportedly refused to include Chiefs offensive coordinator Eric Bieniemy in their coaching search. Now the big question is whether Caserio moves Watson after making concessions on his no-trade clause. And, if he does, what teams are capable of landing him?

Here’s taking a look at the most reasonable fits, including an already hot-rumored destination:

Every team that isn’t set at quarterback and has salary cap space should consider acquiring Watson. He just led the NFL in passing yardage (4,823 yards) and yards per attempt (8.9). He also posted an elite passer rating of 112.4, rushed for 444 more yards and produced 36 total touchdowns.

Caserio came from working with Bill Belichick. The Patriots aren’t bringing back Cam Newton. For now, they’re projected to have nearly $60 million available under the cap, the third-highest total in the league. But would New England be willing to part with much more than their 2020 first-rounder (No. 15 overall) to get him? If they think Watson is good enough to put them back in AFC title contention with Belichick and Josh McDaniels, the answer should be yes.

Watson turns 26 in September and is just entering his prime. After Patrick Mahomes, he’s arguably the second-best young quarterback in the AFC. He’s an established player around whom you can build a championship team. It’s hard to think about sacrificing multiple first-rounders for one player, but players such as Watson don’t usually become available in the open market.

The Dolphins and Texans were busy trade partners when O’Brien was around, most notably involving Houston’s acquisition of Pro Bowl left tackle Laremy Tunsil. Caserio and Miami’s GM, Chris Grier both come from the Patriots’ tree.

According to a report from ESPN’s Chris Mortensen, Watson may be most open to a trade to the Dolphins, which would involve the Texans getting 2020 first-round quarterback Tua Tagovailoa and other significant compensation. This follows the thinking that the Dolphins may not be completely sold on Tagovailoa as their franchise answer.

Tagovailoa may end up being special in time, but Watson is already a sure thing. The Dolphins finished 10-6 in Year 2 under Flores, just missing the playoffs, and have a bright future ahead with plenty of cap space. They also are sitting on two first-rounders, No. 3 overall (via the Tunsil trade) and No. 18. They are best-positioned to give the Texans adequately high compensation.

The 49ers don’t have a ton of cap space for now — around $23 million — but should they pursue Watson, it would be because they’re getting out of Jimmy Garoppolo’s contract. They can do that by eating only $2.8 million in dead money with additional cap relief of $24.1 million.

San Francisco has the No. 12 overall pick and can get aggressive with GM John Lynch. He did take a long look at quarterbacks in the 2017 draft, but ultimately chose defensive end Solomon Thomas over Watson and others before trading for Garoppolo in October of that year.

Watson would thrive in any offensive system, but Kyle Shanahan has a great one that would maximize his dynamic skill set with a strong traditional running game and established playmakers in Deebo Samuel, Brandon Aiyuk and George Kittle. The 49ers, like the Patriots, shouldn’t shy away from giving up a lot to get Watson.

Now we’re getting into some wild cards. WFT started four quarterbacks in the first season under Ron Rivera and Scott Turner. Between Kyle Allen, Alex Smith, Dwayne Haskins (now gone) and Taylor Heinicke, there was no definitive long-term solution. Washington has around $42 million in cap space, projected to be the fifth-highest total.

Turner also is a great offensive coordinator, capable of adjusting well to Watson’s skill set. Washington has key playmakers for Watson in running back Antonio Gibson, wide receiver Terry McLaurin and tight end Logan Thomas before adding more. The challenge would be the compensation: Washington, the NFC East champion but wild-card loser, holds the No. 19 overall pick as its best asset.

Should Watson end up in the AFC East, the Patriots and Dolphins are much better bets. But the Jets know they will miss out on Trevor Lawrence in the draft, so perhaps they can tap into Clemson’s established elite NFL quarterback this way. The Jets are looking at around $70 million in cap space, so affording Watson is no issue. They also can give the Texans the No. 2 overall pick as part of the compensation — which would allow the Texans to draft a high-upside replacement, such as Ohio State’s Justin Fields.

The Jets would need to offer the right coaching situation and continue to build up their supporting cast, but that would also be the case in catering to Fields. Joe Douglas should at least put in a call to Caserio.

The Colts don’t have either Philip Rivers or Jacoby Brissett under contract for 2021 after being eliminated by the Bills in the wild-card playoffs. They are right there with the Patriots in cap space, ahead of Washington.

The obstacles toward a Watson trade starts with the fact Indianapolis is the Texans’ AFC South division rival. It ends with not having a top-20 first-round pick. They have a better shot at Watson than the cap-strapped Bears, but it’s a long one. Just keep in mind the Eagles and Washington once executed an intra-division quarterback trade involving Donovan McNabb.

The Broncos would love to get into this mix under John Elway, assuming they’re still not totally sold on Drew Lock. They do have the appeal of the No. 9 overall pick, but they also have less than $20 million under the cap available.

Denver would need to clear a lot of veteran salary (which it can) and load up on a package along with that first-rounder to land Watson. That seems like a real stretch to put together, and the teams above all offer Watson more comfortable situations.

Tinsley: The amazing (but heartbreaking) legacy of Jimmy Johnson