Matthew Stafford isn't going anywhere, but Darius Slay could be.

ESPN reported Monday the Detroit Lions have "spoken with multiple teams" about a trade for the three-time Pro Bowl cornerback.

Slay has made no secret about his desire for a new contract — he indicated last week on Twitter that he wants to be the highest-paid cornerback in the NFL — and the Lions have been reluctant to meet his demands.

The Lions rejected Slay's bid for a new contract last year, when he skipped voluntary workouts and sat out mandatory minicamp because he was unhappy with his deal, and the team shopped him at last year's October trade deadline.

Lions general manager Bob Quinn said after the season he did not come close to trading Slay in 2019, but declined at the time to speculate on Slay's future with the team.

Slay, who turned 29 on New Year's Day, was once again the Lions' best cornerback last season and often tasked with the responsibility of covering the opposing team's No. 1 receiver. He tied for the team lead in interceptions (two) and passes defensed (13), and started all 14 games he played, missing two with a hamstring injury.

But the Lions have moved on from other productive players, including Golden Tate and Slay's close friend, safety Quandre Diggs, who don't fit the type of personality head coach Matt Patricia wants in his locker room, and if they deal Slay now they can both clear cap space (about $10 million) and potentially add draft capital to bolster their roster this offseason.

Slay is set to make $10 million in base salary this fall — below market for a top cornerback — with another $500,000 available in workout and roster bonuses. He said at the Super Bowl he wants a new contract, but isn't worried about his future either way.

"Whatever it needs to be,” Slay said in late January. “If they give me the contract, I’ll be blessed and fortunate enough for it. Like I say, I always wanted to retire as a Detroit Lion. But if it don’t happen, it’s cool. I’ll be all right. Like I said, if I don’t, somebody will be getting a great player.”

It's unclear what the Lions could get in a trade for Slay, though the fact that he wants a new deal — or would be a one-year rental for any acquiring team — could complicate matters.

The Lions should be able to net at least a Day 2 draft pick, and ESPN reported any team that acquires Slay will have to both compensate Detroit "and Slay with a new deal."

The top cornerbacks in the NFL currently make about $15 million a year, though Ramsey and the Buffalo Bills' Tre'Davious White are in line for extensions this offseason that could approach $20 million per year.

Byron Jones of the Dallas Cowboys, James Bradberry of the Carolina Panthers and Chris Harris of the Denver Broncos are considered the top cornerbacks headed for free agency in March.

The Lions also have the No. 3 pick in the draft, with which they've been commonly linked to Ohio State cornerback Jeff Okudah. 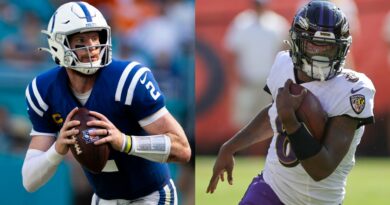 'Monday Night Football' preview: What to watch for in Colts-Ravens

Stephen Jones: Cowboys have no plans of making drastic coaching changes after 1-3 start