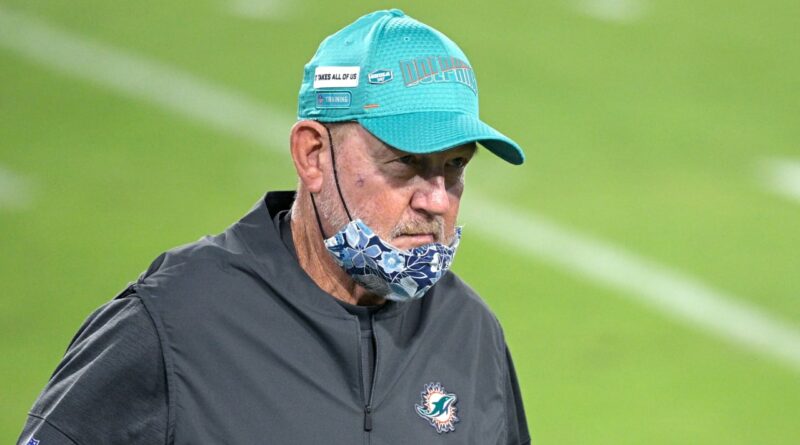 The Miami Dolphins will have a new offensive coordinator for the fifth straight year, and third under Brian Flores.

The team announced Wednesday that OC Chan Gailey has resigned.

“I want to thank Chan for all of his hard work and dedication in what was a unique year,” Flores said in a statement. “He played an important role on the staff and in the development of our young roster. I wish him all the best.”

The news came a day after Flores said he expected all his assistants to return in 2021. Gailey’s resignation throws a wrench into the plan

Gailey came out of a four-year retirement to join the Dolphins this season. The 69-year-old returned to coaching in part to re-join Ryan Fitzpatrick, whom he’d been with in his previous five years as an OC. With Miami fully moving forward with ﻿Tua Tagovailoa﻿ in the future, Gailey will also move on.

Down the stretch of the season, the Dolphins offense struggled to move the ball with the rookie quarterback at the helm, including the Week 17 blowout loss to Buffalo that kept Miami out of the playoffs. Gailey was criticized at times for seemingly running two offenses, one with Tua and another once Fitzpatrick took over late in a miraculous Week 16 comeback win over the Raiders.

The 2020 season culminated Gailey’s 21st as an NFL coach and his second tenure with the Dolphins. Gailey also served as the Fins OC from 2000-2001.

Gailey’s decision to resign sends Flores back to the drawing board. The Dolphins coach fired former OC Chad O’Shea after one season last year.

The next hire will need to be a coordinator who can best groom Tagovailoa to be the long-term signal-caller and face of the franchise Miami has been searching for since ﻿Dan Marino﻿ retired.