The Miami Dolphins have whittled down their running back room, and they’ve cut a former first-round back in the process.

Sony Michel, a former Patriots first-rounder who signed with the Dolphins in May as a free agent, was cut on Monday, the team announced.

Despite winning the second Super Bowl of his career and rushing for 845 yards with the Rams last season, Michel could never really get going in Miami. His preseason rushing line of 13 yards on nine carries (one touchdown) certainly didn’t help his cause, but Michel was also routinely limited in practice for health reasons and was reportedly uneven in his performance when he was out there.

The Dolphins owe Michel the guaranteed portion ($850,000) of the one-year, $2.1 million deal he signed with the team. Michel has run for 3,137 yards and 18 TDs in his four NFL seasons and was instrumental in New England’s run to a victory in Super Bowl LIII, but injuries have somewhat derailed his career ever since.

Along with Michel, the Dolphins also announced the release of RBs Gerrid Doaks and ZaQuandre White, whom were among 13 cuts on by the team on Monday. Chase Edmonds, Raheem Mostert, Salvon Ahmed and Myles Gaskin are those who remain on a loaded Dolphins backfield.

Melvin Gordon holdout: Chargers will not give running back new contract this season, GM says 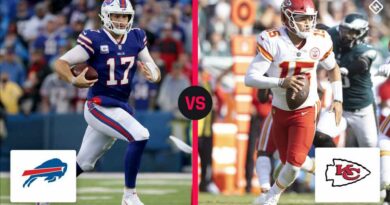 What channel is Bills vs. Chiefs on today? Schedule, time for ‘Sunday Night Football’ in Week 5