Donald Trump has thrown another punch in his feud with the NFL, taking aim at Commissioner Roger Goodell for his reaction to the Black Lives Matter movement and, bizarrely, his dress sense.

As protests calling for racial equality swept across America and then the world, Goodell admitted the NFL was wrong not to fully support players — such as San Francisco 49ers quarterback Colin Kaepernick — for kneeling during the national anthem to draw attention to police brutality.

“We, the National Football League, condemn racism and the systematic oppression of black people,” Goodell said in a video statement in June.

“We, the National Football League, admit we were wrong for not listening to NFL players earlier and encourage all to speak out and peacefully protest.”

Trump has repeatedly voiced his disapproval of athletes kneeling during the anthem, labelling the act a “disgrace” and saying any player who didn’t stand was a “son of a b***h”.

In a sit-down interview with Barstool Sports founder Dave Portnoy, Trump criticised Goodell for his apology, labelling it a “strange thing” and questioning the timing of it.

The American president also rambled on about how the NFL boss should have dressed differently for his video.

“I think there are many ways of showing you’re unhappy because when the NFL saw what was happening … and I don’t know why he (Goodell) did it in the middle of the summer, all of a sudden he’s sitting in a T-shirt in his basement.

“He came out with this thing that no one was even thinking about.

“I don’t understand, he’s talking in the middle of the summer and he’s sitting there, he looked nice in his T-shirt, OK, I don’t know if I would have looked much worse than that to be honest. I wouldn’t wear a T-shirt.

“He would have looked better in a suit and tie.

Trump is no fan of kneeling.Source:AFP

“If I had any advice, No. 1, he could have waited until at least the fall (autumn), right? More importantly I would have worn a suit or tie or even an open shirt that’s loose, not tight.

“He came out with this thing and everyone’s saying, ‘Where did this thing come from, now?’

“The whole big thing started and he’s made a mistake.”

Trump’s comments come as he called for all athletes to stand for the national anthem — just hours after every baseball player and coach knelt before The Star-Spangled Banner was played at the MLB season opener in Washington.

“It’s great that baseball is back, and other sports are back. I hope everyone’s standing; I hope they’re not going to be kneeling when the flag is raised. I don’t like to see that,” Trump said on The Sean Hannity Show.

“That would hurt a lot of people in our country. They don’t want to see that with the NFL, or baseball, or basketball, or anything else.

“There are plenty of places you can protest. You don’t have to protest on the raising of our flag.”

Earlier, the reigning World Series champions Washington Nationals and the New York Yankees kicked off the coronavirus-shortened season with a co-ordinated gesture in solidarity with the Black Lives Matter movement.

Each team’s roster held a huge piece of black cloth as they lined up along the foul lines and knelt for a minute before rising for the anthem.

The Nationals also paid tribute to Black Lives Matter with a black stencil on the back of the pitcher’s mound that featured “BLM” under the MLB logo. 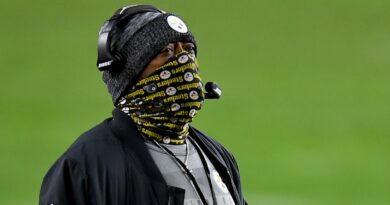 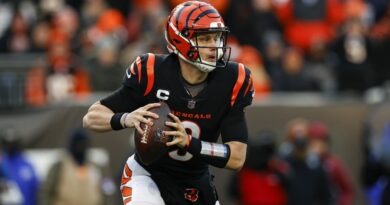