Quarterback Jalen Hurts returned for Sunday’s Week 18 win over the New York Giants to help ensure Philadelphia would lock down the No. 1 seed and the only bye in the NFC. The Eagles are glad Hurts gets an extra week of rest before the next game.

“We are fortunate that we have two weeks until the next time we play,” head coach Nick Sirianni said Tuesday, via the Associated Press. “He’s going to be a little bit healthier than what he was obviously the other day.”

Hurts missed two games with a shoulder injury, both Eagles losses, putting their No. 1 seed in jeopardy. Philly employed a more conservative game plan with the injured QB than in the first 14 weeks. The quarterback runs were curtailed and Hurts avoided contact as much as possible.

Hurts completed 20-of-35 passes for 229 yards with a red-zone interception, and rushed nine times for 13 yards — a season-low 1.44 yards per carry average — in the win over a Giants team resting several starters.

The hope is that the bye week will give time for Hurts to feel fresher ahead of the Divisional Round, and the Eagles can deploy the MVP candidate at full force in the playoffs. The Eagles will face the lowest remaining seed out of the Super Wild Card Weekend games, Tampa Bay, Dallas, New York or Seattle, the weekend of Jan. 21-22. 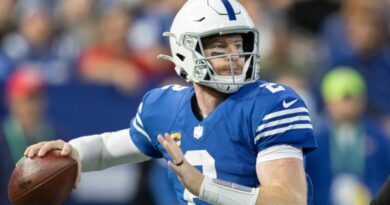