Home » NFL » Eagles get back on track in London, send Jaguars reeling with fourth straight loss

But in the end, they held on to what they wanted most: a victory, as they nearly blew another double-digit lead in the second half.

This time, the Eagles came away with a 24-18 win in front of a record crowd for an NFL game in Wembley Stadium on Sunday. The attendance was announced at 85,870.

Carson Wentz, after turning the ball over twice in the first quarter, finished 21 of 30 for 286 yards with 3 touchdown passes.

It was barely enough. The Eagles lost both Pro Bowl tackles in Jason Peters and Lane Johnson (knee) to injuries in first half, and cornerback Jalen Mills (foot)  in the third quarter. Peters, who was evaluated for a head injury, came back in the second half.

And still, it was a struggle for the Eagles (4-4), who needed a win badly to keep pace in the NFC East. The Jaguars lost their fourth straight and fell to 3-5.

For the second straight week, the Eagles seemed in control after a lengthy drive in the third quarter. This time, they embarked on a 95-yard drive, capped off by Wentz's dump-off pass to Wendell Smallwood that the Wilmington native turned into a 36-yard touchdown.

That gave the Eagles a 17-6 lead with 8:39 left in the third quarter. It was the third time this season the Eagles had a double-digit lead in the second half. They had lost the previous two, including their game last week to the Carolina Panthers when they led 17-0 after three quarters.

And it seemed like it might happen again after the Jaguars cut the deficit to two points on Josh Lambo's field goal with 13:10 left in the fourth quarter.

But the Eagles responded, helped by Jordan Matthews' 36-yard reception, that led to Wentz's 5-yard TD pass to Zach Ertz for a 24-15 lead with 9:55 left.

Even then, the lead wasn't safe after the Jaguars got another field goal.

That's because running back Josh Adams fumbled the ball on the first play, which would have given the Jaguars the ball at the Eagles' 35. But a replay ruling showed that Adams was down and the Eagles kept possession.

Still, the Eagles went 3-and-out on that possession.

The Jaguars couldn't take advantage, and the Eagles managed to survive.

The Eagles took a 10-6 lead at halftime after Wentz's 32-yard touchdown pass to rookie tight end Dallas Goedert with 29 seconds left in the half.

It certainly didn't seem like the Eagles were going to have a halftime lead.

Wentz lost a fumble on the Eagles' first series as he tried to pass just one play after a 31-yard completion to Jordan Matthews down to the Jaguars' 37. On the play, Johnson, who had been dealing with an ankle injury, went down to the ground with a knee injury.

It was the fifth time this season that Wentz has lost a fumble, in six games.

On the next series, the Eagles reached the Jaguars' 24 before Wentz threw an interception into the end zone. He was trying for Josh Perkins, but he was under pressure and the ball floated into the arms of Jalen Ramsey.

Peters left after that drive late in the first quarter to be evaluated for a head injury. Halapoulivaati Vaitai, who had replaced Johnson at right tackle, moved to left tackle. Isaac Seumalo moved from left guard to right tackle, and Stefen Wisniewski came in at left guard.

Still, the Eagles had another long drive, this time getting to the Jaguars' 6. But Wentz was sacked on second down and threw incomplete on third down and the Eagles settled for a 31-yard field goal by Jake Elliott.

Wentz finished 11 of 18 for 155 yards in the first half with a touchdown and interception.

The Jaguars, meanwhile, got a field goal from Josh Lambo from 50 and 57 yards.

The Eagles again controlled the first half, outgaining the Jaguars 217-90 and had 12 first downs compared to four for Jacksonville. 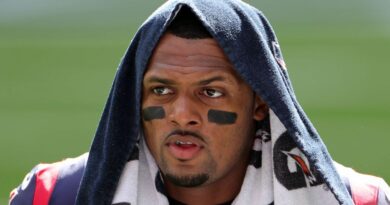 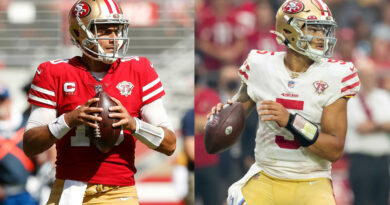 Kyle Shanahan 'pretty optimistic' Jimmy Garoppolo will be able to play vs. Colts