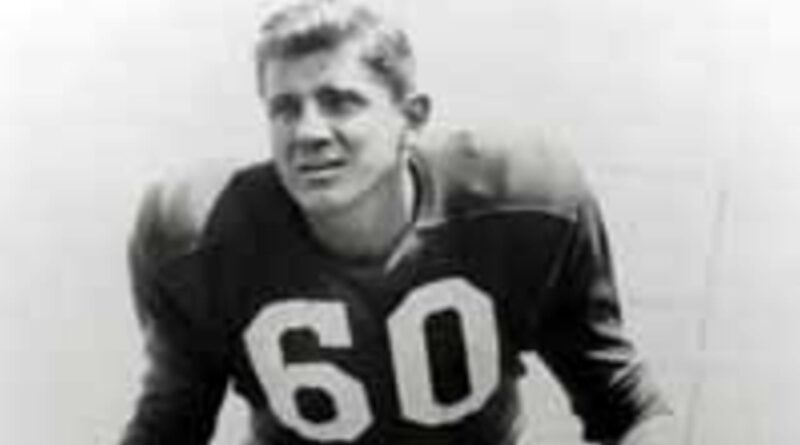 Philadelphia EaglesHall of Fame player Chuck Bednarik passed away Saturday morning following a brief illness at an assisted living facility in Richland, Pennsylvania, the team announced. He was 89.

“With the passing of Chuck Bednarik, the Eagles and our fans have lost a legend,” Eagles chairman and CEO Jeffrey Lurie said via the team’s press release. “Philadelphia fans grow up expecting toughness, all-out effort and a workmanlike attitude from this team and so much of that image has its roots in the way Chuck played the game.

“He was a Hall of Famer, a champion and an all-time Eagle. Our thoughts are with his family and loved ones during this time.”

The story of Bednarik’s career is the history of professional football writ small.

The son of a Slovakian immigrant steelworker, Bednarik entered the NFL’s most violent era with a championship season in 1949. Leading the Eagles to another title in 1960, he materialized as the last of the dying breed of 60-minute players starring on both sides of the ball.

In November of that memorable 1960 season, Bednarik delivered a crushing blow that nearly ended the career of fellow Hall of Famer Frank Gifford. Giants linebacker Sam Huff, a legend who once graced the cover of Time magazine, described the hit as the “greatest tackle I’ve ever seen.”

The iconic image of Bednarik standing over a crumpled Gifford was so stark that it came to be known as “The Tackle.”

When Bednarik’s career ended two years later, pro football ranked behind baseball, boxing, college football and horse racing in the American sports hierarchy. By the turn of the decade, Commissioner Pete Rozelle had taken advantage of the power of television and the NFL/AFL merger to orchestrate football’s meteoric rise to the top of the sports industry.

Bednarik was the product of a different, tougher America.

Surviving on potato soup during The Great Depression, he enlisted in the World War II Army Air Corps as a bomber before finishing high school. Bednarik ended up flying 30 missions while taking fire from the Nazis.

His colorful nickname, “Concrete Charlie,” originated from an offseason and after-practice job as a concrete salesman at a time when his fattest Eagles contract was $25,000 per season.

As his generation escaped the battlefield for the gridiron, providing for family was a much more pressing concern than the physical toll imposed by a vicious game. Bednarik played through a triceps torn so severely that it left a lump by his elbow in 1961. He didn’t come off the field, much less allow a doctor near the injury.

A monster-sized linebacker for his era, Bednarik doubled as a star center — and even kicked off and punted when the need arose. He was also bolstered by rare football instincts which enabled him to function as a coach-like presence on the field.

In fact, a cantankerous Bednarik railed against the very idea in an excellent 1993 Sports Illustrated profile by John Schulian.

“No way in hell any of them can go both ways,” Bednarik emphasized. “They don’t want to. They’re afraid they’ll get hurt. And the money’s too big, that’s another thing. They’d just say, ‘Forget it, I’m already making enough.'”

A nine-time All-Pro, Bednarik placed No. 35 on NFL Network’s 2010 list of “The Top 100: NFL’s Greatest Players.” It’s the highest ranking for an offensive center, placing him alongside Reggie White as the most esteemed NFL stars in Philadelphia history. The defensive player of the year in college football receives an award in Bednarik’s honor from the Maxwell Football Club.

The Eagles haven’t hoisted professional football’s ultimate prize since Bednarik sat on PackersHall of Fame fullback Jim Taylor, waiting for the game clock to expire after toiling through 58.5 of 60 minutes in the 1960 Championship game.

The latest Around The NFL Podcast makes some bold free agency predictions and discusses Adrian Peterson’s future. Find more Around The NFL content on NFL NOW.