No one questioned Josh McCown’s toughness before Sunday’s Eagles game, but now we have one more log for the storytelling fire.

NFL Network’s Mike Garafolo reported that McCown tore his hamstring off the bone in the second quarter of the 17-9 loss to the Seahawks and played through the injury.

The 40-year-old quarterback entered the game after two drives when Carson Wentz exited with a head injury and didn’t return. With backup Nate Sudfeld inactive, McCown played through the hamstring injury. Former University of Houston QB turned wide receiver Greg Ward would have likely been the emergency signal-caller had McCown not been able to tough his way through the rest of the contest.

The injury explains why McCown appeared to be laboring heavily, putting his entire body into throws at times. It’s remarkable that a player of his age was still able to move the offense and keep the game close despite the injury. McCown finished 18-of-24 passing for 174 yards and a 94.8 passer rating. The injury likely contributed to the six sacks he took, including on the Eagles final offensive play on a 4th-and-7 from the 10-yard-line.

Throughout his 17-year pro career, McCown has been known as a warrior who battled through numerous injuries and put his body on the line. Whether it was leaping waywardly into the end zone or crashing into bodies trying to pick up a first down or taking a big shot trying to release a deep pass, no one could say McCown didn’t give it his all.

The revelation that he played through a hamstring injury in his first-ever playoff appearance only adds to the tale.

If the injury ultimately signals a finality to his career NFL journey, McCown certainly made it memorable.

McCown went more in-depth on the hamstring tear on the Tomahawk podcast with Joe Thomas and Andrew Hawkins.

Have you ever pulled a hamstring just from standing [email protected] has.

He talks with @joethomas73 and @Hawk about that, plus his first NFL playoff start at 40 and his widely anticipated decision on whether he’s returning to the NFL. 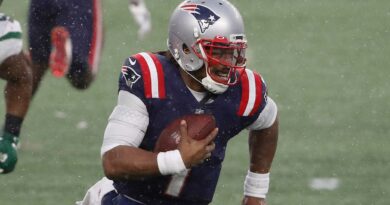