Tom Brady has long made it known he’d like to keep playing until he’s 50. Roughly a quarter of the way through his age-44 season, he’s shown no signs of slowing down and has a favorable matchup upcoming against the Eagles.

The Buccaneers are 4-1 right now and in first place in the NFC South, with much of the success on Brady’s shoulders. In his second year in Tampa, Brady leads the NFL in both yards and completions thus far and is second in passing touchdowns with 15 through five games. He’s also coming off a 411 yard, five touchdown performance his last time out.

Brady will be without star tight end Rob Gronkowski for the third straight game, but it may not matter. Even in Gronkowski’s prolonged absence, the Buccaneers currently rank third in both points scored and total yards. They’re taking on an Eagles team that has one of the worst defenses in the league as well, which should bode well for Leonard Fournette.

The Eagles are coming off a come-from-behind 21-18 win over Carolina, the first fourth-quarter comeback Jalen Hurts has led the Eagles to in his career. Hurts turned the ball over once and fumbled once, but also notched two rushing touchdowns.

Hurts leads the Eagles in rushing yards, an area the Eagles may lean on with tight end Dallas Goeddert on the COVID list. However, seven skill position players on the Eagles have 100 or more receiving yards this season, so Hurts likes to spread the ball around.

Sporting News is tracking all the live updates and coverage from the Week 6 ‘Thursday Night Football’ game. Follow along below.

8:46 p.m.: Following the score by the Eagles, Brady and Leonard Fournette have the Bucs marching. First-and-10 from their 41.

8:41 p.m.: TOUCHDOWN PHILADELPHIA. The Eagles answer with a score of their own as Hurts has tight end Zach Ertz wide open for the touchdown. Philadelphia 7, Tampa Bay 7. The touchdown is the first opening drive TD allowed by the Bucs all season.

8:40 p.m.: Hurts heaves it down field to Jalen Reagor and underthrows it on second-and-20 but a PI on Tampa Bay moves the ball to the Bucs’ 5.

8:37 p.m.: On third-and-12, Hurts hits Quez Watkins for 23 yards and they cross midfield. The pass was tipped by a Tampa defender and Watkins adjusted mid-route to haul it in.

8:35 p.m.: Philadelphia’s Jalen Hurts keeps the drive alive on third-and-7 with an 11 yard rush. His status as the team’s leading rusher continues.

8:29 p.m.: TOUCHDOWN TAMPA BAY. Brady just floats one over the head of Ryan Kerrigan and right into the hands of OJ Howard in the back of the end zone. Tampa’s on the board first. Tampa Bay 7, Philadelphia 0 with 9:26 left in the first.

What channel is Eagles vs. Buccaneers on tonight?

The game will be carried by both Fox and the NFL Network as well as streamed live on Amazon Prime. Joe Buck will lead play-by-play duties while Hall of Fame quarterback Troy Aikman joins him in the booth as an analyst.

Meanwhile, viewers in Canada can watch the game exclusively on DAZN with a subscription.

The game will take place at 8:20 p.m. from Lincoln Financial Field in Philadelphia. 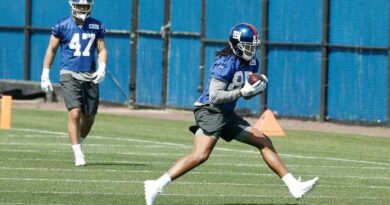 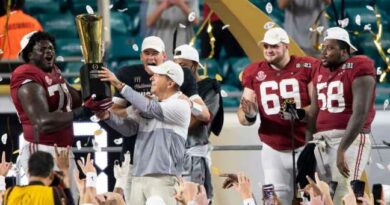