The Philadelphia Eagles wide receiver and world-class hurdler won his second race in five days, sprinting to a 13.22-second first-place finish in the 110-meter hurdles at Thursday’s Diamond League event in Oslo, Norway.

As has been a trademark of his, Allen came on strong on the back end of the race for the victory. Second place went to Spain’s Asier Martinez in 13.30.

Five days earlier, Allen won the 110 hurdles at the New York Grand Prix in a phenomenal mark of 12.84, which is the third-fastest all time.

Despite last playing football in 2016, Allen signed with the Eagles this offseason after he impressed scouts at the Oregon Ducks pro day in April. Allen played for the Ducks and is now aiming to keep on flying with the Eagles.

He won’t slow down for the gridiron until training camp on July 26, though, as he still has the USA Track and Field Outdoor Championships later in June and the World Championships in Europe in mid-July. He’s certainly building up anticipation for Eagles fans in the meantime. 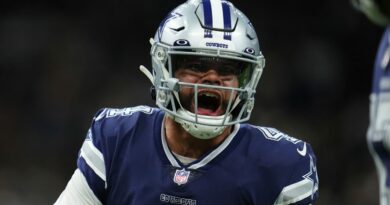