The tight end position is the most “fun” to predict and anticipate since it’s so fluid year-to-year, and our early 2022 fantasy TE rankings are here to look forward to next year.

Move over Travis Kelce, it’s time for someone else to have a turn. Mark Andrews made a strong enough case last year to warrant consideration as the No. 1 overall TE, and with Kelce set to be 33 next season, could this be the year he falls off? We’re not being overly dramatic, as Kelce still takes our No. 2 chair, but Andrews is in the thick of his prime and ready to give you a huge positional advantage.

Darren Waller and George Kittle will continue to rank among the elites, but after a promising rookie season, it’s time for Kyle Pitts to emerge as a game-changer, too. After all, he was the TE5 in half-PPR leagues, despite catching just one touchdown through 17 weeks. Don’t get tricked by Dawson Knox or Dalton Schultz, Pitts is on a whole other level of athleticism and dynamism.

Speaking of Schultz, he is set to be a free agent and he is asking for big money — are we sure Dallas will fork it over? We believe Schultz is a high-quality player, but is he a special enough talent to warrant the big payday on an already loaded team? We shall see. If he goes all in for a big paycheck and ends up in a spot with a mediocre QB, he could finish well outside the top 12 TEs. Knox, on the other hand, could obviously be a solid tight end moving forward, but we have to be careful chasing the high number of touchdowns in a season where he got limited volume.

It seems apparent Rob Gronkowski would rather retire than play with someone not named Tom Brady at QB, so we fully expect him to either remain in Tampa Bay (if Brady doesn’t retire) or hang his cleats up. We’ll have clarity soon enough. Mike Gesicki, Evan Engram, and Zach Ertz will also hit the open market this offseason, so their landing spots will affect fantasy outlooks. Gesicki has largely been productive with whichever quarterback he’s played with, so if he lands in a top with an elite stud, he could climb back up into the top eight. Ertz and Engram will be trickier, though.

Darren Waller, Kittle, and T.J. Hockenson spent a lot of time on the sideline this year thanks to injuries, but their upside here is too strong to ignore. It’s also worth noting Irv Smith Jr. (knee) will be back in 2022, and we were high on him heading into 2021, so we’ll continue to tout him as a top-15 guy.

As always, look out for players who get big QB upgrades. If Aaron Rodgers or Russell Wilson heads to Denver, we have to like Noah Fant’s chance to break out.

Rookie tight ends producing high-quality fantasy numbers is rare, so don’t count on any inside our top 20 (though Pitts and Pat Freiermuth showed us it’s possible), but as always, rookies and veterans can emerge as TE1s or TE2s in the right situation.

Rankings are based on half-point PPR formats. 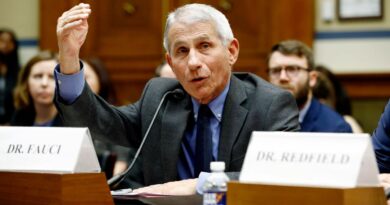 Fauci asks for no parties to avoid Super spread