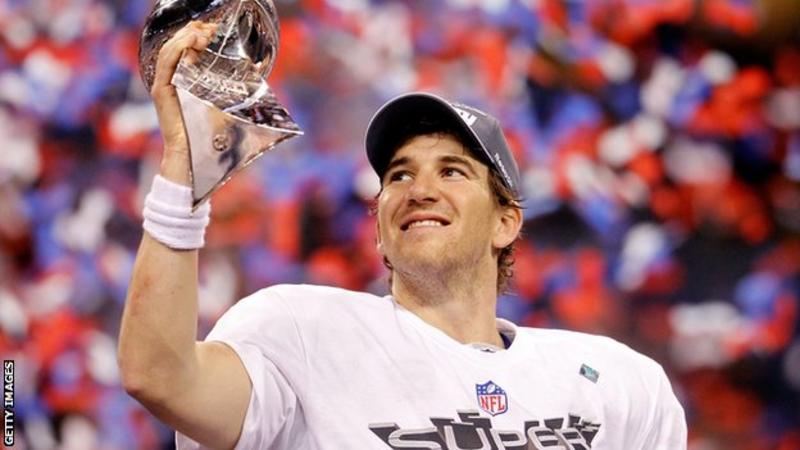 Manning, 39, beat the New England Patriots in the 2008 and 2012 Super Bowls and was awarded most valuable player both times.

He spent his entire 16-year career with the Giants after joining them in a draft-day trade with the San Diego Chargers in 2004.

“He will always be a giant among Giants,” said chairman Steve Tisch.

“We are sincerely thankful for everything Eli has given our team and community.”

He is also one of only five players in NFL history to be named Super Bowl MVP at least twice, alongside fellow quarterbacks Joe Montana, Bart Starr, Tom Brady and Terry Bradshaw.

His tally of 236 regular-season games (234 starts) and 248 total games are both Giants records.

However, Manning spent most of this season as a back-up to rookie Daniel Jones, starting only three games as the Giants missed the play-offs.

“For 16 seasons, Eli Manning defined what it is to be a New York Giant both on and off the field,” said Giants president John Mara.

“He represented our franchise as a consummate professional with dignity and accountability.

“It meant something to Eli to be the Giants quarterback, and it meant even more to us.”

But, having made clear he would not play in San Diego, he was immediately traded to the Giants, with the Chargers taking quarterback Philip Rivers.

From taking over as starting Giants quarterback in November 2004 until he was dropped in November 2017, Manning made 210 consecutive regular-season starts and never missed a game because of injury in his career.

He famously helped prevent the Patriots sealing a perfect season in Super Bowl XLII as the underdog Giants secured a dramatic 17-14 win.

With the Giants down 14-10 in the fourth quarter, Manning led his team on an 83-yard winning drive, including a remarkable play in which the quarterback evaded three Patriots defenders and threw a 32-yard pass that wide receiver David Tyree caught by pressing the ball against his helmet.

Manning then threw a touchdown to Plaxico Burress with 35 seconds left to seal victory.

He repeated the feat four years later, guiding the Giants from 17-9 down to beat the Patriots 21-17.