Home » NFL » Elliott: No pressure with contract, future in Dallas 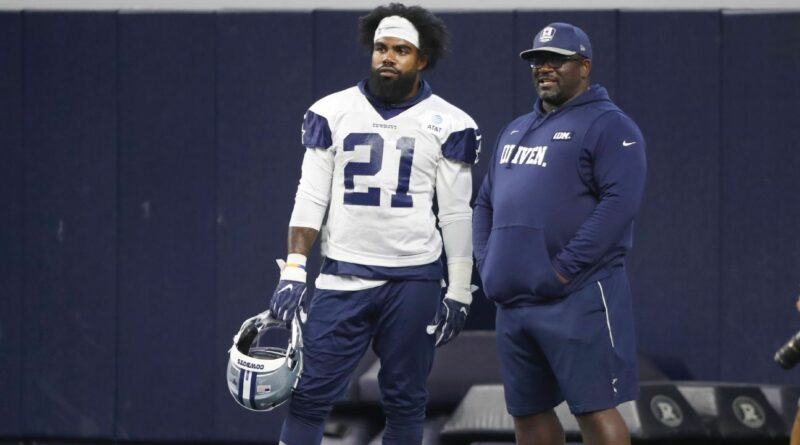 OXNARD, Calif. — With no guaranteed money on Ezekiel Elliott’s contract beyond 2022, many wonder if this is his last year with the Dallas Cowboys.

Elliott is not one of those wondering.

Elliott’s $12.4 million base salary is fully guaranteed as part of the $90 million extension he signed in 2019. The Cowboys have an easier path financially to move on from him in 2023 because there is no more guaranteed money in his contract. He is set to make $10.9 million in 2023.

A big reason for the drop last year was a partially torn posterior ligament in his right knee, which he suffered in the fourth game of the season. Elliott was on pace for more than 1,500 yards through the first five games last season with five touchdowns. He topped 69 yards just once in the final 12 games and finished with 1,002 yards and 10 touchdowns on 237 carries.

For more than a month he wore a bulky brace on his knee for added protection as the injury limited his burst.

Elliott never considered missing a game. He has missed just one game in his career due to injury.

“Top of the list on his redeeming qualities and there’s a lot of players you see around the league who if things aren’t just right, they’ll sit down. That’s not Zeke,” executive vice president Stephen Jones said. “He wants to be out there for his team, his teammates and I admire the hell out of that and what 21’s all about. One thing’s for sure: We’re going to get 21’s best effort, week in and week out. And he’s a great football player.”

Elliott admitted to some concern the knee was not healing fast enough after the season ended, but surgery was never an option.

Elliott was able to work with his personal coach, Josh Hicks, before training camp.

“It’s tough being injured and kind of feeling yourself lose a step,” Elliott said. “So it definitely helped me get back to moving at the speed I was used to and bringing that confidence back to myself — back to my body, back to my mind that I could make those cuts.”

With Elliott and Tony Pollard, the Cowboys believe they have one of the best running back tandems in the NFL. Pollard had a career-high 719 yards on 130 carries last year. He also caught 39 passes for 337 yards, which has led some to call for a more equitable split in touches.

Pollard and Elliott could see more action on the field together this year as the Cowboys look to replace some of receiver Amari Cooper’s production in different ways. But Elliott will remain a key figure.

“Zeke Elliott is one of our rocks on this team,” McCarthy said. “He’s a keystone player. The communication, his ability to do all the extra little stuff and those are things I obviously get to look at and be a part of. The extra work he puts in pre-practice, post-practice, Tuesdays, I mean he’s in the quarterback meetings in the morning. The physical part of it — he overcame a lot to play and I think that speaks volumes about him and you need those type of individuals to win championships.”

Jerry mum on timeline for decision on Garrett