Falcons owner Arthur Blank has resisted any urge to make massive changes in response to another lackluster season for his franchise, but there will be at least a coaching staff shake-up after the season. Sources said the Falcons have been mulling changes to at least one coordinator spot – if not more – and could move quickly to fill those openings.

Offensive coordinator Steve Sarkisian has been under fire for much of his two seasons at the helm, with the run game in particular failing to meet the standards set by previous coordinator Kyle Shanahan. Former Seahawks coordinator Darrell Bevell is among the potential successors for the position; Bevell was with the Falcons in a consulting role in the preseason and is already familiar with the playbook.

(Stream all of Sunday’s games on fuboTV, try it for free, and stream the CBS games on CBS All Access.)

The Falcons defense has failed to make the gains expected with an influx of draft picks and talent in recent years, which could lead to changes on that side of the ball as well. Head coach Dan Quinn is a previous defensive coordinator himself. Marquand Manuel is in his second season as the team’s defensive coordinator but he, too, has been under fire this season.

Atlanta entered the season among the Super Bowl favorites but has been an afterthought in the second half of the season, with its brand-new stadium – set to host the Super Bowl in five weeks – not anywhere close to capacity down the stretch. Blank has continues to tell confidants he does not plan on making huge macro-level changes despite the Falcons finishing no better than 7-9 this season. But sources said lower coaching staff changes – and a potential reshuffling of lower-level personnel staff – are quite possible beginning this week.

Steve Smith Sr. shreds Jets DC Gregg Williams for penalties: ‘His defense is about that BS’ 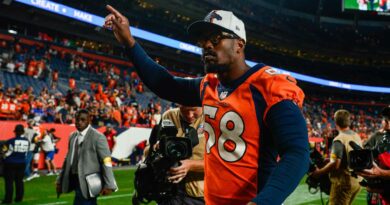 Von Miller has emotional reaction after Broncos trade him to Rams