Atlanta Falcons owner Arthur Blank hears and feels the disappointment with how the season has gone, noting that as bad as the fans feel, he feels just as terrible.

When you start off with playoff aspirations, and are sitting at 1-5 with the Los Angeles Rams set to visit, it hurts even worse.

"We understand the frustration of our fans, we’re more than sympathetic," Blank told NFL Media during a break from the Fall Meetings in Fort Lauderdale, Fla. "We’re walking in their shoes. I’m with them. Because the expectations were different from where we are right now. When you differ that dramatically from expectations, it’s always that much more disappointing."

The losses, of course, turn the focus to the job status of head coach Dan Quinn. On the hot seat, with the owner examining his performance and the bye coming, everything is ramped up. While it’s clear nothing has been decided, improvement at some point soon seems to be necessary.

Blank was asked if the bye in two weeks was a fair time to evaluate.

"I don’t think that’s fair," Blank said. "I don’t have any specific timetable. Just looking at each game one at a time. It’s the bye week, yes, but it’s not a trigger for making any changes. We’ll just continue to look at what we see developing and continue to support the coach and support the general manager and continue to ask them to do everything they can to put some wins up on the scoreboard."

Blank said the evaluation isn’t a "one- or two-game yardstick." He said the team is committed to winning the next game and then evaluating after that.

Simply, he pointed to this Rams game and believes things will come out differently.

"I think we’ll see some changes," Blank said. "I think you’ll see them on the field on Sunday. Obviously for competitive advantage reasons, we won’t talk about them, but… we have a lot of football left to play."

Perhaps those will be evident Sunday. In Blank’s mind, the offense is playing better and on the right track. The defense, obviously, is struggling. The fact that it is Quinn’s specialty and that he serves as coordinator, is not encouraging.

"Our defense has not played well, and nobody knows that better than our coach," Blank said. "That’s what he’s done for his entire life, a position coach, a coordinator and then a head coach. So, if there were easy answers we would’ve put them in place already. But we’re making adjustments, he’s making adjustments and hopefully they’ll put us in a better position going forward." 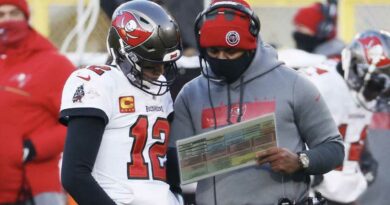