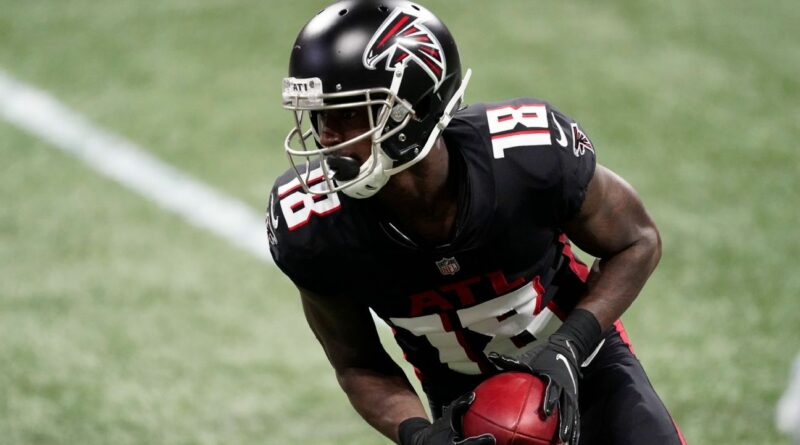 FLOWERY BRANCH, Ga. — Atlanta Falcons receiver Calvin Ridley will not travel to London for Sunday’s game against the New York Jets because of an undisclosed personal matter, the team announced Thursday afternoon in a statement.

“We are in support of Calvin during this time and will respect his privacy on the matter,” coach Arthur Smith said.

Ridley is one of three Falcons not traveling to England along with receiver Russell Gage (ankle) and defensive lineman Marlon Davidson (ankle).

Ridley, 26, has 27 catches for 255 yards and a touchdown this season and is coming off a seven-catch, 80-yard game against Washington on Sunday. Despite the season-high in yards, Ridley had two drops Sunday in the 34-30 loss to Washington, only the second time in his career he’s dropped two passes in a game.

With Ridley out of the lineup and Gage still working his way back from an ankle injury suffered in Week 2 against Tampa Bay, Atlanta’s top receivers against the Jets on Sunday would be Olamide Zaccheaus and Tajae Sharpe.

Zaccheaus has filled in at wide receiver in Gage’s absence and has six catches for 69 yards and a touchdown this season. In his career, he’s played 25 games with three starts. Sharpe, who signed with Atlanta in the offseason, has four catches for 29 yards this year. He last started a game in 2019 when he was with Tennessee.

The Falcons could also look to use other options in Ridley’s absence. Cordarrelle Patterson has been a mix of running back and receiver for the Falcons this season, and tight ends Kyle Pitts and Hayden Hurst both have high-level pass-catching skills. All three — like Ridley — were first-round picks when they were drafted.

Pitts said Thursday he doesn’t think his role will change if Ridley was unable to play Sunday.

“I don’t think that would change anything,” Pitts said. “I’m still going to be the tight end I am and contribute in any way.”

The Falcons also have receivers Christian Blake and rookie Frank Darby on their roster. Juwan Green, whom the team temporarily elevated from the practice squad in Week 3 against the Giants, could end up elevated again despite not playing against New York. Austin Trammell and Keelan Doss, who has 11 career catches for 133 yards, are also on the practice squad.

What channel is 49ers vs. Bengals on today? Time, TV schedule for Week 2 NFL game