Those who just missed the playoffs in their season-long leagues don’t have to close the book on 2021 just yet. There are still three DFS main slates remaining, so we’re back with our Week 16 FanDuel tournament lineup. We have an elite fantasy QB with a reasonable price tag, a few workhorse RBs, and a cheap boom-or-bust WR. All in all, we’re excited about our daily fantasy picks here, and we’re aiming for the top spot of GPP tournaments.

Before we get into this week’s lineups, here are the basic rules for FanDuel contests. Scoring is pretty standard, with the only notable settings being four-point passing TDs and half-point PPR.

Sunday main slate, $60,000 budget, no more than four players from one team

QB Jalen Hurts, Eagles vs. Giants ($7,700). Not only does Hurts possess 30-point upside, but the Giants are also in a hopeless state at the moment. Sure, the Giants’ last win was against the Eagles in Week 12, a game in which they held Hurts to 9.86 FanDuel points, but we’re expecting a much better performance this time around.

RB James Robinson, Jaguars @ Jets ($8,200). In his first game out from under Urban Meyer’s incompetence, Robinson handled 21 touches on 24 opportunities. His final tally (16.3 FD points) wasn’t winning the week for many, but it was still an encouraging performance. The Jets have the worst run defense in the NFL by multiple measures, so an even better performance is well within Robinson’s grasp.

RB Miles Sanders, Eagles vs. Giants ($6,400). Sanders is finally getting the volume for which his fantasy owners have been pining. He’s eclipsed 15 FD points in each of his past two games and handled 47 touches over that span. With an increased workload, the likelihood of a touchdown increases, and with Hurts as our quarterback, we’re hoping the two can form a sneaky stack.

WR Antonio Brown, Buccaneers @ Panthers ($7,000). While Brown might be rusty after such a long layoff, he’ll be the main show in town as far as the Bucs’ passing game is concerned. Chris Godwin (ACL) is out for the season, and Mike Evans (hamstring) is week-to-week, so targets will be flowing through Brown and tight end Rob Gronkowski for the foreseeable future.

WR Tee Higgins, Bengals vs. Ravens ($6,500). We originally had Brandin Cooks here, but we decided to pivot after he was placed on the reserve/COVID list. The Bengals are headed into a big AFC North showdown against a banged up Ravens secondary. Baltimore remains tough to run against, and Bengals stud running back Joe Mixon is nursing an ankle sprain that could hamper him on Sunday. That puts Higgins in a prime position to produce another strong performance. Higgins is coming off of a dud, but he eclipsed 100 receiving yards in each game from Weeks 12-14 and hauled in a pair of touchdowns over that span.

WR K.J. Osborn, Vikings vs. Rams ($6,000). Osborn’s Week 15 performance didn’t generate much enthusiasm, but he’ll continue serving as the No. 2 if Adam Thielen (ankle) remains out. It’s reasonable to expect Jalen Ramsey to spend plenty of time on Justin Jefferson in coverage, leaving more room, in theory, for Osborn to roam. We’re happy to give him another run in our lineups considering his modest salary.

TE Mark Andrews, Ravens @ Bengals ($8,000). With George Kittle off the main slate and Travis Kelce (reserve/COVID) in doubt for Sunday, Andrews is going to be a popular play. Sometimes it’s best to sit down and eat a bowl of chalk. He’s coming off two solid performances, including last week’s 30.6 FD-point eruption. Additionally, the Bengals have given up the most FD points to tight ends. (Update: Josh Johnson is starting at QB for Baltimore, lowering Andrews’ outlook but not taking him completely off the board.)

FLEX (RB) Ronald Jones II, Buccaneers @ Panthers ($5,400). Leonard Fournette (hamstring) is out for a while, so Jones will be thrust into the No. 1 role in the Bucs’ backfield. It’s not our favorite move to include two players from the same team in a non-stacking manner, but Tom Brady is very particular about the players he trusts. Jones may have only entered the “inner circle” out of necessity, but he’s still likely to receive a healthy workload.

DEF Chiefs vs. Steelers ($4,300). The Chiefs’ three-game streak of 15-plus FD points ended last Thursday, but another one will be on deck with a date against the Steelers and their leaky offensive line. It will be worth checking in on the Chiefs’ COVID outbreak prior to locking them into your lineup, but the potential for sacks and turnovers will be present.

Mr. Peanut has died and his funeral will be aired during the Super Bowl 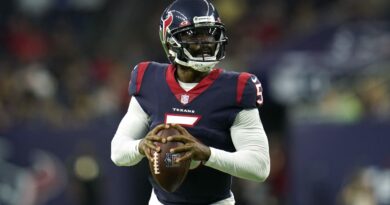