Week 11 in fantasy football means there’s not much time left to make a playoff push in your season-long leagues. Getting the right lineup advice is more important than ever with Thanksgiving just around the corner. Fortunately, after some tough bye weeks, there are only two teams, the Broncos and the Rams, out of action, but there still are a lot of injury concerns and intriguing matchups, good and bad, that are affecting start ’em, sit ’em decisions.

If you’re already out of the playoff race in your season-long league, you can always make some money in DFS. We’re here for you, too, with some daily fantasy football value picks below.

Joe Burrow, Bengals (at LV). There should be no worries about his pre-bye clunker vs. Cleveland. The big numbers will start again this week.

Derek Carr, Raiders (vs. CIN). Carr still put up digits in a bad game last week, and he’ll be chucking often opposite Joe Burrow at home.

Kirk Cousins, Vikings (vs. GB). Cousins should be involved in a shootout playing off the running game.

Ryan Tannehill, Titans (vs. HOU). Tannehill has had a strong run the past month, as he’s been needed more without Derrick Henry (foot) and gets a primo spot at home.

Mac Jones, Patriots (at ATL). Jones has been boosted by the run and should stay aflame in Hotlanta on Thursday night.

Justin Fields, Bears (vs. BAL). Fields should be focused after the bye with more effective running and passing, taking some inspiration from Lamar Jackson in a great matchup.

Daniel Jones, Giants (at TB). The Bucs keep losing key defensive bodies, and Jones, back where he got his first NFL win, will put some pleasing garbage stats opposite Tom Brady.

Jimmy Garoppolo, 49ers (at JAX, $5,600 on DraftKings, $7,100 on FanDuel). Jimmy G is playing like a QB who doesn’t want to give up his job to a raw first-round rookie. San Francisco might not need to throw a ton to drag dow the Jags, but his weapons call for another multiple-TD game with around 250 yards.

Cam Newton, Panthers (vs. WAS). He might get two scores again, but don’t have high rushing or turnover-free expectations because of Christian McCaffrey and the scheming of his former coach on the other side.

Carson Wentz, Colts (at BUF). Wentz flopped against the Jaguars at home, so there’s no confidence he can rebound against the Bills’ defense on the road.

Tua Tagovailoa, Dolphins (at NYJ). The numbers might say yes, but this feels like a bit of a road trip-up against a motivated defense.

Matt Ryan, Falcons (at NE). He tends to surprise, whether good or bad, but the Patriots’ defense suggests Ryan will be slammed again.

Taylor Heinicke, Washington (at CAR). He could get it done here again with his weapons ,but save him for a contrarian DFS play because of his boom-or-bust nature.

Tyrod Taylor, Texans (at TEN). He didn’t inspire with his Dolphins clunker, so streamer beware after the bye.

Baker Mayfield, Browns (vs. DET). He’s a desperate call against a bad defense because he just doesn’t look right.

Ben Roethlisberger, Steelers (at LAC). This feels like another run-heavy game in a tough passing matchup.

Saquon Barkley, Giants (at TB). He should be busy in the passing game and can run a little easier at full health with no Vita Vea.

Josh Jacobs, Raiders (vs. CIN). He’s got a good chance to rebound with around 70 yards rushing and a TD.

Michael Carter, Jets (vs. MIA). Ignore the Ty Johnson love in the passing game because Carter is the man now.

Myles Gaskin, Dolphins (at NYJ). On paper it seems like a spot to finally trust him again for decent RB2 production.

Devonta Freeman, Ravens (at CHI). He’s taken control as their most reliable backfield option, and the Bears’ run defense is leakier than you think in what should be a grinding game.

Wayne Gallman, Falcons (vs. NE). He’s a pure volume-based play ahead of Mike Davis if Cordarrelle Patterson (ankle) is out.

D’Onta Foreman, Titans (vs. HOU, $4,900 on DraftKings, $6,200 on FanDuel). This is a well-timed Foreman “revenge game” in the division, as he looked like the unquestioned best back for Tennessee last week. The matchup is exceptional, and he will produce with more key volume.

Kenyan Drake, Raiders (vs. CIN, $5,200 on DraftKings, $5,900 on FanDuel). The Raiders didn’t use their backs well against the Chiefs, so there will be an overcorrection with Drake becoming a needed spark in the passing game. There’s a good chance the game script will be beneficial in a potential shootout in the desert.

Clyde Edwards-Helaire and/or Darrel Williams, Chiefs (vs. DAL). This could turn into a frustrating committee with them and a little Derrick Gore and Jerick McKinnon in a game expected to have a lot of downfield passing.

Chris Carson and/or Alex Collins, Seahawks (at ARI). They could totally turn to an uninspiring split should Carson (neck) return limited.

Zack Moss and Devin Singletary, Bills (vs. IND). The Colts only trail the Bills in stopping backs in fantasy, and now there’s the Matt Breida curveball.

Jordan Howard and Boston Scott, Eagles (vs. NO). This is a brutal matchup up front for a split backfield.

David Johnson and Phillip Lindsay Texans (at TEN). Things won’t be any better after a bye.

Tony Pollard, Cowboys (at KC). He should get less work in a shootout where Ezekiel Elliott plays until the end.

J.D McKissic, Washington (at CAR). WFT finally realized it needs to be more/all about Antonio Gibson.

D.J. Moore, Panthers (vs. WAS). Moore should feel revitalized with Cam Newton and should put up their most pleasing non-CMC day.

Tee Higgins, Bengals (at LV). Higgins should work over the Raiders’ secondary outside along with Ja’Marr Chase.

Hunter Renfrow, Raiders (vs. CIN). Renfrow has been the man all over the field wih volume and scoring, and he keeps getting it done.

DeVonta Smith, Eagles (vs. NO). He’s locked into Jalen Hurts now and should see massive targets as they move him around to get open again.

Brandin Cooks, Texans (at TEN). He’ll come through with the good kind of hot garbage against a still weak secondary.

Brandon Aiyuk, 49ers (at JAX). The Jaguars will give plenty of futile attention to Deebo Samuel, which will open up several big plays for him.

Kadarius Toney, Giants (at TB). Here’s hoping that Jason Garrett will figure out he needs to be featured as their top playmaker. Pump the brakes for anyone else from Big Blue.

MIchael Gallup, Cowboys (at KC). Lock him in for a big-play TD from Dak Prescott.

Kendrick Bourne and Jakobi Meyers, Patriots (at ATL). These two should can provide some WR3 help in a sweet early-week spot.

Jaylen Waddle, Dolphins (at NYJ, $5,600 on DraftKings, $6,700 on FanDuel). Waddle should be busy in a favorable matchup working with Tua Tagovailoa, as Miami can scheme him open for some big plays.

Elijah Moore, Jets (vs. MIA, $4,900 on DraftKings, $5,900 on FanDuel). Sticking with the rookie theme in the same game, Moore has looked as a versatile weapon of late himself for his AFC East team and has a good chance to join Waddle in denting the end zone.

Rashod Bateman, Ravens (at CHI, $4,500 on DraftKings, $6,000 on FanDuel). With Jaylon Johnson likely to follow Marquise Brown, this other rookie should find himself in another favorable matchup and remain efficient for Lamar Jackson away to support Mark Andrews.

Mike Williams, Chargers (vs. PIT). He did light them up in a previous matchup and can go off when healthy at any time, but he’s clearly not healthy with more knee injury issues limiting him.

Emmanuel Sanders and Cole Beasley, Bills (vs. IND). They really don’t need to force the big play to Sanders at all with everything else working as needed. Beasley’s ribs are also hurting more, and they will be careful again.

Allen Robinson, Bears (vs. BAL). He was encouraging after the bye, but you can’t trust anything away from Justin Fields to Darnell Mooney.

Corey Davis, Jets (vs. MIA). The Jets will have success elsewhere, and the Dolphins’ high-priced outside corners will continue to play better.

All non-Hopkins Cardinals (at SEA). They seem to have little upside, as they have become a run-heavy and spread-it-around team, which won’t change should Kyler Murray (ankle) return.

All Falcons (vs. NE). You can’t trust Matt Ryan or his non-Kyle Pitts targets against a brutal secondary, even at home.

All Saints (at PHI). Deonte Harris is the best bet if desperate, but Trevor Siemian should continue to spreading it around against a stingy Eagles’ secondary.

All Jaguars (vs. SF). When the receiving corps is led by Jamal Agnew…ew.

Hunter Henry, Patriots (at ATL). He will keep it going in a terrific matchup.

Dawson Knox, Bills (vs. IND). He should get back on track stretching the seam for Josh Allen vs. a zone defense.

Pat Freiermuth, Steelers (at LAC). He rebounds big-time in a another great spot.

Dalton Schultz, Cowboys (at KC). He finds the end zone for sure here.

Tyler Conklin, Vikings (vs. GB). He’s doing sweet damage as a third option, and Kirk Cousins will trust him again.

Cole Kmet, Bears (vs. BAL). Here’s feeling they will use him the right way in a favorable spot to keep helping Justin Fields.

C.J Uzomah, Bengals (at LV, $3,500 on DraftKings, $5,200 on FanDuel). It’s hard to know when it will be a big “Uzomah game” given his still limited targets from Joe Burrow, but the matchup is outstanding in what should be a high-scoring game in which you want have shares across DFS lineups.

Dan Arnold, Jaguars (vs. SF). The 49ers have been rather good against the position with the Tyler Higbee TD being an anomaly.

Zach Ertz, Cardinals (at SEA). He’s getting lost, and the matchup isn’t the best.

Adam Trautman, Saints (at PHI). By the numbers and recent usage it feels good…but no.

Evan Engram, Giants (vs. TB). This is more of a wideout, spread-out game.

All Colts and all Browns. No messy committees please.

Chargers (vs. PIT). They get the prime-time emotional bump vs. a rusty Big Ben.

Seahawks (vs. ARI). If it’s Colt McCoy (pec) or Chris Streveler, this would be a no-brainer. If if it’s Kyler Murray (ankle), tread lightly.

Cardinals (at SEA). They can still get after it with a few sacks and maybe a takeaway or two.

Washington Football Team (at CAR, $2,400 on DraftKings, $3,500 on FanDuel). WFT played defense the way it should against the Buccaneers, and even without Chase Young (knee) and Montez Sweat, it’s suddenly making better use of its talent for Ron Rivera and Jack Del Rio. Rivera’s knowledge of Cam Newton will help force some key sacks and takeaways on the absolute cheap.

Saints (at PHI). The Eagles don’t give up much.

Eagles (vs. NO). The Saints don’t give up much.

Packers (at MIN). They cool off on the road against Kirk Cousins.

Cowboys (at KC). Not vs. this version of Patrick Mahomes.

Get more of Vinnie Iyer’s in-depth fantasy football advice for Week 11 by subscribing to the Locked On Fantasy Football podcast. 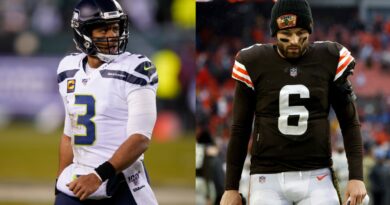