George Kittle, Curtis Samuel, and Sterling Shepard headline pass-catchers in question for Week 5, and their statuses could have a ripple effect on fantasy start-or-sit decisions. Get the latest injury updates on these important receivers below, and check back for updates to this article heading into the weekend.

Kittle was in and out of practice last week, and he didn’t practice Wednesday or Thursday this week with a calf injury. He was somewhat in danger of missing last week’s game, but this week feels like a more serious threat, especially with a bye coming up in Week 6. San Francisco takes on Arizona this Sunday, so the 49ers will need all the offensive help they can get. If Kittle does play, we have to think Trey Lance would pepper him with targets.

For now, we place him at TE4 in standard and PPR leagues. If he’s out Ross Dwelley, who caught a touchdown in Week 4, becomes a decent deep-league streamer at tight end.

Samuel (groin) missed the first three weeks of the season before returning in Week 4 in a limited role. It appears he’s still not over his ailment, as he missed Wednesday and Thursday’s practice this week. He looks to be on the wrong side of “questionable,” but we’ll monitor this ahead of Sunday’s game. We’ve already seen Terry McLaurin be the only other consistent Washington WR when Samuel is out, and now with Logan Thomas (hamstring) hurt, it looks like J.D. McKissic and Ricky Seals-Jones are first in line to take more targets. That said, the only must-start for Washington are probably McLaurin and Antonio Gibson, with McKissic being a flex consideration, and Seal-Jones being a deep-league streaming option.

If Samuel does play against the Saints this week, we view him as a low-end flex at WR45 in PPR and WR48 in standard leagues.

Shepard (hamstring) was out for Week 4 and he looks to be heading toward carrying a “questionable” or “out” tag into Week 5 (@ Dallas). He missed practice on Wednesday and Thursday, so things aren’t looking great. In his absence, Kenny Golladay and Kadarius Toney had their best performances of the year, and it’s hard to imagine they can put Toney back on the bench for the rest of the season. That said, Shepard will still get run, but Darius Slayton will probably be the odd man out when he returns from a hamstring injury.

We expect Shepard to be out, but we rank Golladay and Toney as WR29 and WR49 respectively in PPR leagues. 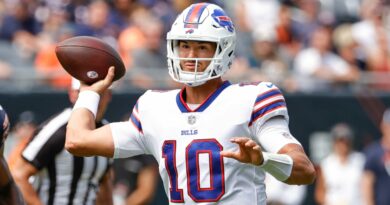