Running backs Josh Jacobs, Trey Sermon, and JaMycal Hasty are all dealing with the injury bug early in the season. Find out their latest status updates and how they are affecting Week 3 fantasy waiver pickups and RB rankings. We’ll hint at their Week 3 availability and identify backups with fantasy appeal if they were to miss time. As always, check back for more updates as fresher news rolls in.

For updates on banged-up QBs Carson Wentz, Andy Dalton, Tua Tagovailoa, and Tyrod Taylor, click here. For the latest on Diontae Johnson, Darrell Henderson, Jarvis Landry, and more go here. And for Odell Beckham Jr, Amari Cooper, and Will Fuller, check in here. For all the latest fantasy news, follow us on Twitter @SN_Fantasy.

Is Josh Jacobs playing in Week 3?

Jon Gruden called Jacobs “very questionable” leading up to the Raiders’ Week 3 game vs. Miami after he missed Week 2. He’s dealing with ankle and toe injuries, and the team has made it a point to say they like Peyton Barber, so perhaps they won’t rush Jacobs back. The Raiders sit at 2-0 and might be facing the Jacoby Brissett-led Dolphins offense, so we’ll have to keep monitoring this situation.

For now, we’re ranking Jacobs as if he will be set to play. He’s our RB22 in standard and RB28 in PPR. He already loses passing work to Kenyan Drake, and will likely see even less receiving opportunities given his ailments. Drake already warrants flex consideration even if Jacobs does play, but he looks even better if Jacobs is out again. Peyton Barber apparently will handle a lot of the work on the ground like he did last week (13 carries) if Jacobs is inactive, but Drake is the more attractive overall play here.

Is Trey Sermon playing in Week 3?

Sermon’s career has not got off to a fun start. He was a healthy scratch in Week 1 then proceeded to fumble and get injured on his first NFL carry in Week 2. Sermon took a big hit to the head and is in the NFL’s concussion protocol. Still, there’s a chance he plays against the Packers on Sunday Night Football, but we’ll have to wait for updates later in the week.

Players often come back from concussions next week, but there’s no real way to know at this point. If he does play, we rank him as a modest spot of RB57 in PPR and RB56 in standard. He’s just not a guy you want to be starting at this point until we see some positive signs out of him. Elijah Mitchell remains the starter, while Trenton Cannon and Kerryon Johnson could be fantasy factors at some point with JaMycal Hasty (ankle) also going on the shelf.

Is JaMycal Hasty playing in Week 3?

Hasty suffered a high-ankle sprain and has already been ruled out for Week 3. With all of the injurieis going on in the 49ers’ backfield, Hasty carries decent future value, but he’s likely going to be out for a few weeks. As mentioned with Sermon, Trenton Cannon is now the only fully healthy running back on the 49ers’ roster, but Kerryon Johnson sits on the practice squad. Elijah Mitchell (shoulder) looks like he’ll be OK, but the injury bug has hit hard enough that any RB on the roster could be a factor at some point during the season. 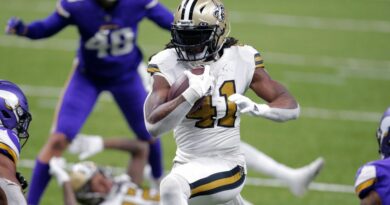