Our Week 1 WR PPR rankings obviously see some variance from our standard set, but the top of the list sees much of the same guys (just somewhat moved around). Wide receivers all have different profiles, with some geared more toward PPR leagues and others to standard. Some guys near the middle to bottom of our rankings will see a larger weekly variance based on targets, touchdown dependency, or a few other factors. Be sure to note the significant difference when deciding who to start and who to sit in the initial week of the regular season.

A high-volume target receiver like Davante Adams (vs. Saints) or Keenan Allen (@ Washington) is especially valuable in PPR. Meanwhile, a player like Mike Evans (vs. Cowboys) sees a decline. Obviously, the guys mentioned are all locks in starting lineups across both formats, but a player like Cole Beasley (vs. Steelers) could be on the borderline of your starting lineups in one and an afterthought in the other. There will be many cases where he is in lineups in PPR while riding the pine in standard. He sees a ton of volume, but his average depth of target remains low. Robby Anderson (vs. Jets) is another guy who is more attractive in PPR, and we like him this week against his former team.

Of course, matchups, QB-play, and injury concerns always factor into our rankings. Stefon Diggs (vs. Steelers) has a combination of a bad matchup and a slight injury (knee) concern that drops him to WR11 in PPR. Obviously, he’s a must-start, but don’t act shocked if he’s not among the top-five wideouts like you drafted him to be.

Courland Sutton (@ Giants) and Jerry Jeudy (@ Giants) are among those with QB concerns. We now know Teddy Bridgewater is the starter in Denver, but we’ll see how effective he is in this offense. Jeudy could be especially hurt because of Bridgewater’s lack of deep-ball prowess. Of course, both Broncos could see huge rises in our Week 2 rankings if the offense is humming, but for now, it’s best to be cautious with the unknown. Add Corey Davis (@ Panthers), Elijah Moore (@ Panthers), Jakobi Meyers (vs. Dolphins), and any of the other wideouts playing with rookie QBs to that mix.

We love Brandon Aiyuk and Deebo Samuel (@Lions) this week because of their matchup with Detroit. All year, we’ll likely be ranking anyone who plays against Detroit highly. A Shanahan offensive show should take place. Allen Robinson (@ Rams) has a matchup in L.A., home of Jalen Ramsey, so he’s a tough play this week, but in PPR, he should still catch enough short passes to be worth using. Still, no matter what happens, don’t overreact. Robinson will ball out soon enough.

Be sure to explore the depths of this list if you’re in a deep league. A small start-sit decision could be the difference between beginning 1-0 and 0-1 to begin the year.

We’ll be updating these WR PPR rankings as needed throughout the week, so check back for the latest changes and analysis.

Rankings are based on full-point PPR scoring formats

Individual analysis will be added early next week and updated throughout the week to reflect any changes to the rankings. 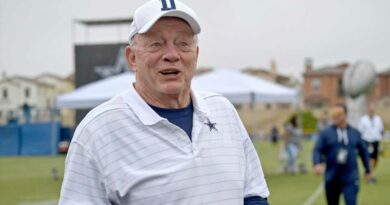 Why did Jerry Jones pour salt on a McGriddle in bizarre ‘Hard Knocks’ moment? SN investigates