Wide receivers as a whole have continued to outperform RBs, and this week feels like it will be no different. There are a ton of studs with tremendous matchups, but we won’t waste breath telling you to start them. However, there are opportunities for other wideouts on the same teams to outproduce their seasonal averages. Our Week 5 fantasy WR rankings will sort through all the matchups and project the pecking order. After a month of the regular season, stats like fantasy points against are ready to play a significant role in start ’em, sit ’em decisions.

DK Metcalf (vs. Rams) and Ja’Marr Chase (vs. Packers) should still be in your lineups, but it’s worth noting they’ll likely shadowed by Jalen Ramsey and Jaire Alexander, respectively. Last season, in two matchups with Ramsey, Metcalf caught just eight passes for 87 yards and had zero touchdowns. We bring up Ramsey every single week, but he can be that much of a factor. Of course, we’ve seen top receivers have good-to-great games against the Rams in each of the past three weeks, so obviously you shouldn’t be too worried about someone like Metcalf. Alexander hasn’t been as dominant this year so far, but he’ll relish the chance to take on the rookie WR.

Marvin Jones (@ Titans) and Laviska Shenault (@ Titans) have solid matchups this week, and the Jags will always have to attempt a lot of passes because of their terrible defense. Also, DJ Chark’s broken ankle should mean more targets for that duo. Jakobi Meyers (@ Texans) and Nelson Agholor (@ Texans) have had decent amounts of success this year, and the Texans’ secondary is susceptible to give up huge games to WRs. The Bills’ duo of Emmanuel Sanders (@ Chiefs) and Cole Beasley (@ Chiefs) are top-level flex plays this week. We’ve seen enough to know the Chiefs defense can’t stop a cold. This game will be one of the top targets for DFS lineups, too. Both quarterbacks could knock on the door of 60 passing attempts. Jaylen Waddle (@ Buccaneers), and DeVante Parker (@ Buccaneers) could be solid plays this week, too, especially if Will Fuller V (hand) is out. The Buccaneer’s secondary is the only thing keeping the Bucs from dominating every game with ease.

Jamison Crowder (vs. Falcons) made his season debut last week and had a good game, and his matchup this week should yield another one. Kadarius Toney (@ Cowboys) could also be in position for a good game depending on the statuses of Darius Slayton and Sterling Shepard, who were both out last week because of hamstring injuries. Randall Cobb (@ Bengals) and Marquez Callaway and Deonte Harris (@ Washington) are also in play with decent matchups.

Diontae Johnson (vs. Broncos) and JuJu Smith-Schuster (vs. Broncos) are in tough spots this week. The Broncos have yet to face a potent air attack, so who knows how great they really are. However, the Steelers pass offense led by Big Ben has been downright pitiful. Johnson will still warrant starting consideration, especially in PPR leagues, but don’t be surprised if this is an unproductive day all around for that offense. Odell Beckham (@ Chargers) has looked decent after his return from a torn ACL, but the Chargers’ secondary is one of the most loaded groups in the league. As usual, Cleveland’s game plan will be to control the game on the ground if they can. Allen Robinson (@ Raiders) is also a worry given his slow start and Vegas’s perhaps surprisingly solid defense.

Curtis Samuel (vs. Saints) returned in Week 4, but the Saints defense looks like it’s one of the top units in the league. Rashod Bateman (vs. Colts), Tre’Quan Smith (@ Washington), and T.Y. Hilton (@ Ravens) could be in line to play for the first time this season. Bateman and Gallup are probably the two with the most appeal this week.

We’ll be updating these WR rankings as needed throughout the week, so check back for the latest changes and analysis.

​Fantasy WR Rankings Week 5: Who to start at wide receiver

Rankings based on standard, non-PPR scoring

Talib on Marcus Peters: 'He is good, he's perfectly fine' 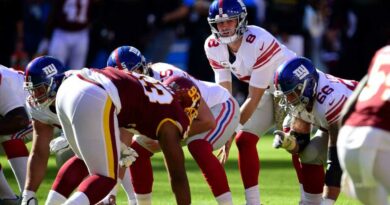 What time is the NFL game tonight? TV schedule, channel for Giants vs. Washington in Week 2