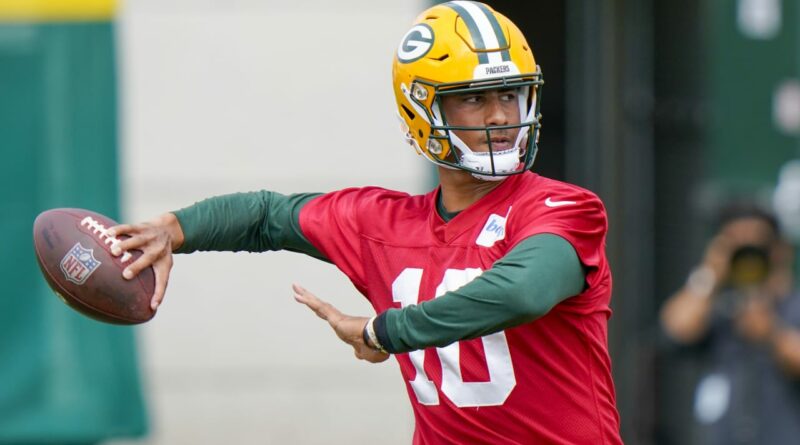 This isn’t a column about signal-callers who already have shown that they can play at a high level. There are a handful of those players starting over with new teams — QBs like Indianapolis’ Carson Wentz, Detroit’s Jared Goff and the Los Angeles Rams’ Matthew Stafford. They’ve been selected to the Pro Bowl and made significant money off their past production. This piece is focusing on players who are still trying to establish themselves, and ultimately showcase the skills that made them so attractive to talent evaluators in the first place.

It’s this select group of quarterbacks that sit in a unique position. They have teams who’ve invested in them, and their success could ultimately lead those teams into the postseason. The big question is whether any of the men in this category will deliver. They all have plenty of talent, but they have to do more than what they’ve shown so far to take that next step.

Here are five quarterbacks who fit that profile as the biggest wild cards heading into the upcoming season.

No quarterback in the NFL will have more eyes scrutinizing him when training camps open than Love if he’s the Packers’ QB1 at that time. He was supposed to be a player waiting patiently in the wings for his chance to lead the team after Aaron Rodgers exited the franchise. Nobody could’ve predicted a little over a year ago — when Green Bay traded up to draft Love in the first round of the 2020 draft — that Love’s moment could be coming so quickly or with so much controversy attached to it.

We’ve all spent a lot of time wondering what the Packers are going to do now that Rodgers has made his dissatisfaction with the team known. What hasn’t received nearly as much attention is how Love factors into this situation. If he’s able to show substantial improvement, the Packers will have a lot more leverage swinging in their favor as the season approaches. After all, nobody really knew what Green Bay had in Rodgers until the team traded Brett Favre in 2008 after an ugly feud that had plenty to do with the franchise wanting to move on from Favre and put Rodgers on the field. Make no mistake, the Packers would love to have Rodgers under center, especially after he won the MVP award last season. Of course, things could change if Rodgers and the team are able to reconcile, but for now, with the team uncertain about whether the 17th-year veteran will report to mandatory minicamp next week, it appears there’s a strong chance that Love will be taking the snaps with the first-stringers.

So far, head coach Matt LaFleur has been encouraged about the offseason progress Love has made but the coach has also stressed that there’s a long way to go with this process. This is still a second-year player who didn’t even dress for a game in 2020. The Packers were slow-playing his development with the hope that such a decision would pay off in the long run. Now that future could be coming faster than anybody expected, which means they better have bet on the right guy to succeed a future Hall of Famer.

It’s difficult to know exactly what the Dolphins have in Tagovailoa because there are so many unusual circumstances involved in evaluating him. He was considered a can’t-miss prospect at Alabama until he sustained a severe hip injury in November 2019, his final season with the Tide. He didn’t play again until Week 6 of last season and his performance was up and down throughout the year. Tagovailoa also didn’t help himself recently by admitting he didn’t know the Dolphins’ playbook that well during his first season. It’s fair to assume a combination of COVID-19-related restrictions and the rehabilitation process impacted Tagovailoa’s ability to master Miami’s schemes. What isn’t up for debate is how much this team’s success hinges on him looking like the star many forecasted him to be when he dominated college football. The Dolphins finished 10-6 last season and narrowly missed the playoffs. They possess a strong defense and have added more dynamic elements to their offense, specifically rookie wide receiver Jaylen Waddle, a former college teammate of Tagovailoa’s.

Dolphins head coach Brian Flores also has praised the efforts he’s seen from his second-year quarterback so far this offseason.

“He’s definitely more comfortable,” Flores told local reporters during a recent video conference call. “But I think that’s normal for anyone in their second year of doing something.”

Flores added that Tagovailoa is “in a good place” physically, which is just as crucial for anybody around this team to hear. The bottom line is that Miami chose Tagovailoa fifth overall in last year’s draft because it believed in his potential and the QB who was selected one pick later — the Los Angeles Chargers’ Justin Herbert — wound up winning the Offensive Rookie of the Year award. So, this isn’t just a year when Tagovailoa needs to put questions about his durability behind him and show he’s more adept with the playbook. It’s one in which he has to prove that all the hype that once surrounded him really was warranted.

There’s a lot of chatter about the Saints wanting to have a quarterback competition between Winston and Taysom Hill. That would require the belief that there’s actually two legitimate NFL QB1s involved in such a battle. Hill is a nice weapon for Saints head coach Sean Payton, a battering ram of a runner who can throw some passes when necessary and went 3-1 as the starter last season while filling in for the now retired Drew Brees. Winston was taken first overall in the 2015 draft and eventually watched the Tampa Bay Buccaneers give up on him after five NFL seasons. You can’t blame the Bucs for that move; they wound up with Tom Brady and a Super Bowl win after letting Winston walk. Winston landed in New Orleans, where he likely learned plenty while working on a one-year deal and watching how Payton and Brees operated.

As much as Hill wants to be the full-time starting quarterback instead of a gadget player who can fill in as the QB1 if an injury presses him into duty, Winston has all the tools to be the real deal. He’s done substantially more than any other quarterback on this list — including posting more than 4,000 yards passing in three different seasons — and he’s surely salivating at the chance to redeem himself. More importantly, he’s on a Saints team that still has plenty of talent, especially with offensive stars like running back Alvin Kamara and wide receiver Michael Thomas. Keep in mind that the Saints blasted the eventual Super Bowl champs twice during the regular season before falling to them in the Divisional Round of the playoffs. So, Winston certainly understands the opportunity that has been presented to him. The dude threw a lot of passes while in Tampa Bay but he’s mostly remembered for the ones that went to the wrong team (he threw a league-high 30 interceptions in 2019). The hope here is that he’s learned a lot in the past year about how to play the quarterback position in a more efficient manner.

The first thing to know about Jones is that he won’t have any excuses this coming season. The Giants will have more talent around him than he ever enjoyed in his first two years. Jones is expected have a healthy Saquon Barkley after the star RB missed all but two games last season due to an ACL tear. The team made big investments in two new wide receivers (free agent Kenny Golladay and first-round pick Kadarius Toney) who will join a group that already includes Sterling Shepard and Darius Slayton. He’ll have a new tight end (Kyle Rudolph) to pair with Evan Engram, too.

What Jones doesn’t have in great measure is time. The Giants will have to decide on whether to pick up the fifth-year option on his rookie contract by next spring. The way Jones has progressed thus far, it’s pretty hard to say which way that discussion is going to go in the future. He had enough promising moments during his rookie season in 2019 that he earned the nickname Danny Dimes. However, the effort Jones produced last season, when he threw 11 touchdown passes and 10 interceptions in 14 starts, literally felt like pocket change. The good news for Jones is that his team still plays in a woeful division filled with other franchises fighting their own struggles. All you have to know is that the Giants were still contending for the NFC East title in the final week of the regular season, even with a 6-10 record. If Jones takes the next step, they might actually be talking about being a winning team when winter rolls around.

Like Winston, Lock is going to spend the next few months locked in a quarterback competition. The problem is that Lock is facing much tougher competition in his quest to keep his job. The Broncos traded for Teddy Bridgewater in April, which means they added a player with far more experience but one who also is now on his fifth team in as many seasons. It’s an interesting competition because the Broncos clearly are trying to win with a defensive-led squad that will require a quarterback who can be efficient. Bridgewater’s entire reputation is built on game management. Lock, on the other hand, has more upside, more potential for the big plays that can come in an offense that has young talents like Jerry Jeudy, Noah Fant and Courtland Sutton catching passes. There’s no question that Lock hasn’t had as good of an opportunity at owning this position as he would’ve liked after entering the league as a second-round pick in 2019. He only played in five games as a rookie (four that resulted in wins). Lock also didn’t have much time to work with young receivers like Jeudy and K.J. Hamler — who didn’t have much on-field offseason practice time because of COVID-19 restrictions — and his top wideout, Sutton, sustained a season-ending knee injury in the season opener. Lock clearly isn’t lacking for other motivation, either. He recently told reporters that “maybe one day I’ll go back and read and laugh about all the things that were being said from these people that ended up being completely wrong.” He added that he’s determined to turn the Broncos into a contender.

“I want this team to be good,” he said. “I want myself to be really good. But really I wanted nothing to look back on and regret. I was going to give everything I had this offseason … to be able to come in and help this team get to the playoffs, help this city come back. It was a rough year last year with COVID, no one being at games. A lot of stuff got thrown our way. I took all that from last year and put it into this one offseason plan to be able to get a little fire behind this city and this team.”

That’s some bold talk coming from a third-year veteran who’s fighting for his job. Lock understands the Broncos are operating in a division with the defending AFC champs (Kansas City) and a team that is brimming with talent (Los Angeles Chargers). If the Broncos want to start thinking about postseason play again, his success will help that dream seem far more realistic.