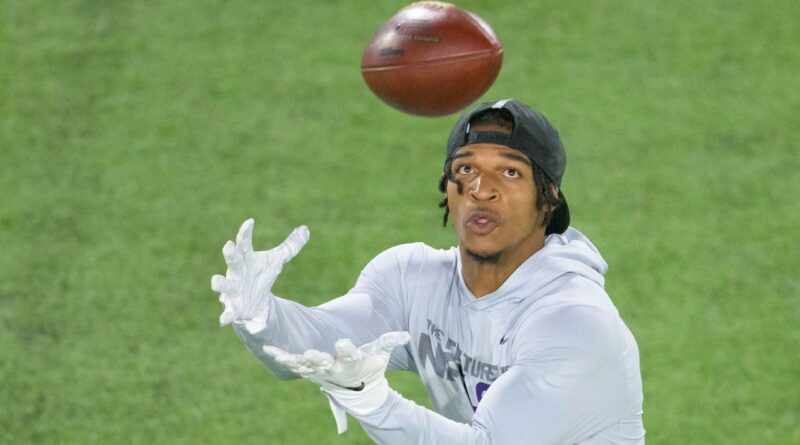 With the 2021 NFL Scouting Combine operating under a different format this year, pro day workouts are taking on a heightened importance this spring. Florida, Kentucky, LSU, Notre Dame and Wake Forest were among the schools that held their pro days on Wednesday, giving some top 2021 NFL Draft prospects a chance to make an impression on scouts and NFL executives.

How did the top talents perform? Check out the quick rundowns below.

NOTE: Times listed below are unofficial.

Pitts turned in unofficial 40-yard dashes of 4.44 and 4.46, further evidence that he’s a tight end in name only. The consensus All-American rarely played with his hand on the ground at Florida, and with his athleticism, that’s not likely to change at the next level.

“Who’s gonna cover him?” Florida coach Dan Mullen said to NFL Network’s Kimberly Jones, who was on assignment in Gainesville on Wednesday. “With his speed, with his size, with his athleticism, with his ball skills … You can have a lot of fun in a game plan room putting him all over the place.”

Toney posted an unofficial 40 time of 4.44, according to NFL Network’s Kimberly Jones. This led Jeremiah — who loves Toney’s playmaking ability and “dynamic” route-running skills, but initially wasn’t sure about his straight-line speed — to make a simple pronouncement on NFL Network’s Path to the Draft Pro Day Special:

Toney also soared 11 feet, 4 inches on his broad jump, per Reese’s Senior Bowl executive director Jim Nagy. That’s serious explosiveness for an exciting slot receiver prospect who offers NFL clubs the ability to get open quickly on short routes and make big plays after the catch. Checking in at 5-11 5/8 and 193 pounds, Toney also brings a high level of toughness in fighting for extra yardage and rarely running out of bounds.

The Gators’ Heisman Trophy finalist threw for a large contingent of scouts Wednesday in a lengthy session. After measuring 6-5 1/2 and 236 pounds, he had all his top targets at UF catching his passes, including Pitts, Toney and WR Trevon Grimes. Trask opened his script with short routes and eventually lengthened out with some impressive intermediate and deeper throws.

“He’s accurate, and as a big guy, he’s actually more of a touch thrower than he is a huge-armed power [thrower],” Jeremiah said on NFL Network’s Path to the Draft Pro Day Special.

Davis is one of the fastest risers in Jeremiah’s Top 50, having moved up 11 spots in the latest update. His pro day performance definitely justified the hype. According to a Jeremiah scouting source who attended the Kentucky pro day, the 6-foot-3, 234-pounder produced a 4.49 40-yard dash, 42-inch vertical and 11-foot broad jump — spectacular numbers for an off-ball linebacker.

The 2020 opt-out is one of this draft class’ truly elite prospects, and he didn’t disappoint on Wednesday, showcasing his rare skill set during an impressive all-around workout that was highlighted by a swift 4.38 40-yard dash. Chase also posted an eye-opening number in the vertical leap — 41 inches, second-best at the LSU pro day behind DB JaCoby Stevens (42 inches) — as well as an 11-0 broad jump, 7.00 three-cone drill and 3.98 short shuttle.

“Look, I can try to pretend like some of this stuff is hard, but this one is not difficult: Just watch the game tape, first of all, watch what he does there. He’s just completely dominant,” Jeremiah said on NFL Network’s Path to the Draft Pro Day Special. “He does it with speed, with physicality and with phenomenal hands to attack the football. He’s a great route runner.”

Like Chase, Marshall notched a 4.38 40, and like Chase, he understandably declined a second run. Marshall also churned out a 10-5 broad jump, 39-inch vertical leap and 19 reps of 225 pounds on the bench press, skipping out on the agility drills (three-cone and short shuttle).

With those athletic traits packed into Marshall’s healthy frame (6-2 5/8, 205 pounds), the versatile inside/outside threat is a contested-catch wizard. And he’s entering the discussion as a Day 1 draft pick. Asked by NFL Network’s Jane Slater — who was on assignment in Baton Rouge — if he considered himself a first-round type of player, the 20-year-old touchdown maker didn’t hesitate: “Most definitely.”

﻿﻿﻿﻿A hamstring injury prevented the Tigers’ standout linebacker from working out, but Cox intends on a makeup date, according to NFL Network’s Jane Slater. He issued a statement to teams regarding the setback. Despite the injury, Cox attended the pro day to support his teammates.

Cox’s pass-coverage skills impressed scouts in his only season at LSU after transferring from FCS powerhouse North Dakota State, and the 6-foot-3, 232-pounder followed that up with a strong practice week at the Reese’s Senior Bowl.

Owusu-Koramoah is one of the top linebacker prospects in the draft, one who brings hybrid safety skills in pass coverage, but ND coach Brian Kelly believes NFL teams should have a specific plan for him.

“(He’s) a plug-and-play guy on the right side,” ND coach Brian Kelly told Giardi. “You could make that case that he’s probably not (an NFL) left tackle, but at the right tackle position, you plug him in, and he plays right away in the NFL because of his consistency.”

During Wednesday’s Path to the Draft Pro Day Special, Jeremiah projected Eichenberg as a likely second-round pick who has a chance to be chosen at the end of the first.

One of the standouts among defensive linemen at the Reese’s Senior Bowl, Basham blazed the 40-yard dash with times of 4.64 and 4.65, according to RSB executive director Jim Nagy.

Basham is an athletic pass rusher with potential to play either inside or outside. On Wednesday, he checked in at 6-foot-3 1/4 and 274 pounds, lighter than his school-listed weight of 285. Basham also posted a 34-inch vertical jump, a 10-2 broad jump, a short shuttle time of 4.25 and a three-cone drill of 7.13, with 20 reps on the bench press.