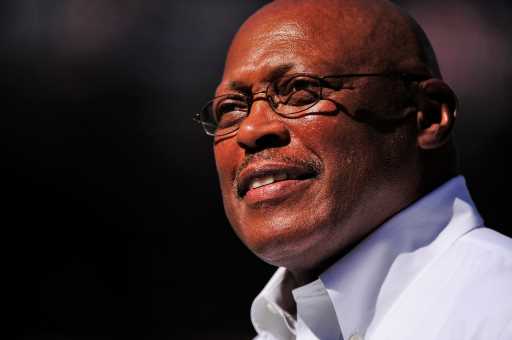 The first great player in Broncos history has passed away.

Floyd Little, the franchise’s star during years of struggles in the 1960s and ‘70s, died Friday night following a battle with a rare form of cell cancer.

“Floyd Little was a true hero of the game,” Pro Football Hall of Fame president David Baker said. “He was a man of great integrity, passion and courage. His contributions off the field were even greater than his amazing accomplishments he did on it. Floyd’s smile, heart and character epitomized what it meant to have a Hall of Fame life.”

On Nov. 21, Killorin announced on social media that Little had been placed in hospice; he started chemotherapy treatments last summer.

Floyd Little was born July 4, 1942, in New Haven, Conn., and  attended Hillhouse High School in New Haven and Bordentown Military Institute in New Jersey. He was six when his father died of cancer.

Little was recruited by the United States Military Academy (led by Gen. Douglas MacArthur), Notre Dame and Syracuse. Little’s meeting with MacArthur was at the Waldorf Astoria in New York and included meeting baseball stars Roy Campanella and Elston Howard.

According to reports, Little chose Syracuse on the advice of former Orange running back Ernie Davis, who visited Little in Connecticut. At Syracuse, Little continued the tradition of star running backs who wore No. 44, following Jim Brown and Davis.

A three-time All-America selection from 1964-66 (freshmen were ineligible to play), Little rushed for 2,704 yards and 46 touchdowns. He finished fifth in the Heisman Trophy balloting in ’65 and ’66.

In 2010, decades after his college career, Little returned to Syracuse to be a special assistant to the athletic director, aiding with fundraising, recruiting and mentoring.

Upon his return to Syracuse, Little said Davis, who died at age 24 in 1963 due to leukemia, was the motivating factor.

“My life has been tied to Ernie’s life because I wanted to be the Ernie Davis that he couldn’t be,” Little said. “That’s how I lived my life, because of Ernie Davis not having a chance to live his.”

Little worked at Syracuse until 2016, when he and his wife relocated to Las Vegas.

“Floyd Little embodied what it means to be Orange,” Syracuse Chancellor Kent Syverud said in a statement. “He was an all-American student-athlete. He set records in the NFL. He achieved success in the business world. Floyd mentored countless student-athletes and dedicated his time, energy and resources to improving the lives of others. He was a great friend, to me and to his beloved Syracuse University. … Floyd Little, No. 44, will forever be our Orange MVP.”

Little went against the grain from the moment he was drafted because he actually signed with the Broncos, not the much more secure National Football League.  In their first seven years, the Broncos were unable to sign their first-round pick (imagine that happening these days).

Playing on struggling teams and with mix-and-match quarterbacks, Little was long the Broncos’ shining light. He was the NFL rushing champion in 1971 (1,133 yards) and currently ranks second in team history in rushing attempts (1,641), yards (6,323) and touchdowns (43), behind fellow Hall of Famer Terrell Davis in all three categories.

Little never appeared in a playoff game and was a part of only two winning teams (7-5-2 in ’73 and 7-6-1 in ’74), but his contributions to making pro football in this region a hit will never be forgotten.

Little led the Broncos in rushing seven times. The season-ticket base rose from 24,650 to 49,000 during his career. His No. 44 is one of only three numbers retired by the Broncos, joining quarterback Frank Tripucka (18) and quarterback John Elway (7).

“Without Floyd Little, there would be no Denver Broncos,” said Tom Mackie, who co-authored Little’s 2006 autobiography, in a 2010 interview with the Post’s Mark Kiszla. “Either they don’t get picked up by the NFL in the merger or they move to Alabama and become the Birmingham Broncos.”

Think about this: In the first 23 years of Broncos history, Little was the only eventual Pro Football Hall of Fame inductee to play for the franchise. From 1983-2002, six eventual Hall of Famers starred for Denver.

Translation: For many years, Little was It for the Broncos.

Little’s first six Broncos teams never won more than five games. The AFL West in those days was ruled by Kansas City and Oakland. But he led the AFL in 1969 in yards per rush (5.0) and yards per game (81.0) and earned All-Pro honors.

In Little’s final home game, against Philadelphia in December 1975, he scored on a 66-yard catch and a two-yard rush.

At the time of his retirement, he ranked seventh all-time in rushing and he had nearly 5,000 more yards rushing than the next-closest Broncos player.

Little was universally beloved by fans and teammates and widely respected by opponents.

Two days after he played his 117th and final pro football game, and one day after he announced his retirement, Floyd Little was honored in a letter to the editor that appeared in the Dec. 22, 1975, Miami Herald.

“I always dreaded seeing him come out of the backfield on a pass pattern or get the handoff from the quarterback, always wondering how I would ever stop him. No matter how bruised and battered he was after the game, he always managed to find me in the middle of the field to say hello and ask about my health. … He is a person which all children can look up to and the parents can honestly say, ‘I hope my child grows up to be like him.’”

The letter was signed “Nicholas A. Buoniconti,”  Dolphins linebacker.

Little’s wait for pro football immortality was frustrating. He had the support of his contemporaries, like former Baltimore Colts tight end/NFL Players Association president John Mackey, who wrote to the selection committee: “If there’s no room for Floyd Little in the Hall of Fame, please take me out and put him in.”

Thirty-five years after his retirement, Little was selected for induction. Shortly after, he received a call from former Pittsburgh defensive lineman “Mean” Joe Greene.

What did Buoniconti and “Mean Joe” see? The first great Broncos player. Period.

Maybe so, but Little never let his long wait dampen his enthusiasm for having a bust in Canton, Ohio.

In February 2019, the Hall of Famers gathered in a second-floor ballroom at the Atlanta Marriott Marquis for the annual Merlin Olsen Luncheon. Little walked over to the Denver media contingent on hand to cover the next night’s selection of owner Pat Bowlen and cornerback Champ Bailey.

If there is somebody who enjoyed being a Hall of Famer more than Floyd Little, they need to step forward. He loved the jacket. He loved going back to Canton. He loved all of the events with his colleagues. He loved it all.

As the interview was breaking up, Little was asked, “What’s it really like to be a Hall of Famer?”

“I tell the guys, if you’re not feeling well, you’re sick, you have a little cold, just can’t get started — go to your closet and put this baby on,” he said of his gold jacket. “You will feel so much better. Wearing one of these is one of the great experiences in my life.

“I love wearing it. It makes me feel different.”