Former Broncos outside linebacker DeMarcus Ware was among the 26 semifinalists named Wednesday for the Pro Football Hall of Fame’s Class of 2022.

Ware’s 138 1/2 career sacks are 13th in NFL history, according to Pro Football Reference, which tracks sacks back to 1960.

Boulder native Tony Boselli, who played offensive tackle for the Jacksonville Jaguars, was named a semifinalist for the seventh time. Boselli is one of 17 players who were also semifinalists in 2021.

The semifinalists will be reduced to 15 finalists before the final vote in February. 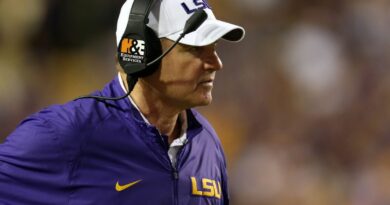 $50 million lawsuit filed against LSU by whistleblower who reported on Les Miles for racist, inappropriate remarks

You Vike that! Kirk Cousins comes up big for Minnesota in New Orleans