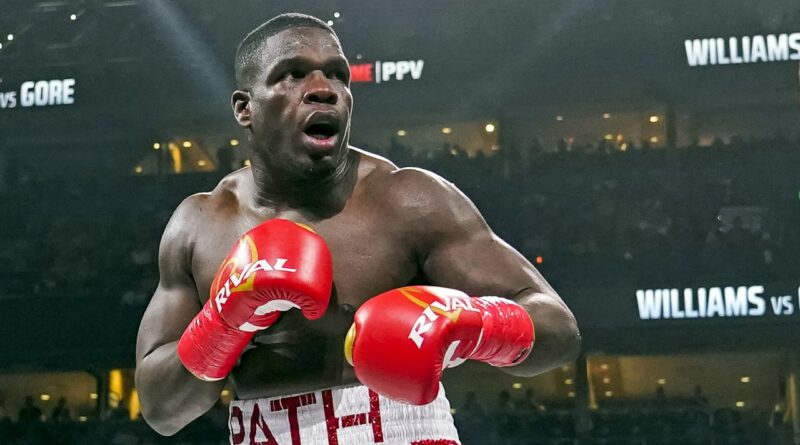 One of the NFL’s all-time leading ground gainers, ﻿Frank Gore﻿ has let it be known that his days on the gridiron are coming to a close.

However, it would seem Gore’s days in the boxing ring are just getting going.

Gore is set to make his professional boxing debut on May 14 in Jackson, Mississippi on a Gamebred Promotions card, the promotion announced Monday.

An opponent is yet to be announced for Gore, who is 38, but will turn 39 on fight night, as it also happens to be his birthday. The event will be streamed on FITE.

Gamebred Promotions is the promotional entity of UFC star Jorge Masvidal and the card will feature boxing and mixed martial arts bouts.

This past week, Gore announced his intentions to sign a one-day deal with the San Francisco 49ers and then retire.

Gore is a 16-season NFL veteran who’s played for five teams and churned out 16,000 yards rushing in his career, which is third all time and trails only Emmitt Smith and Walter Payton in the league history books.

Taken in the third round of the 2005 NFL Draft by the Niners, Gore played 10 seasons in San Francisco before stints with the Indianapolis Colts, Buffalo Bills, Miami Dolphins and New York Jets, but hasn’t played since the 2020 campaign with the Jets.

Since then, he took part in an exhibition boxing match against former NBA player Deron Williams amid a wave of celebrity boxing cards often involving athletes from other sports. Gore lost via split decision, but clearly hasn’t been deterred from giving it another go.

While an official retirement from the NFL is still in the works for Gore, an official date for his pro boxing debut has been announced.

Opinion: Roc Nation’s most significant impact with NFL must be far beyond Super Bowl music