Home » NFL » From Broncos Country to orphans in Africa, Demaryius Thomas made lives better. “He never got over leaving Denver.” 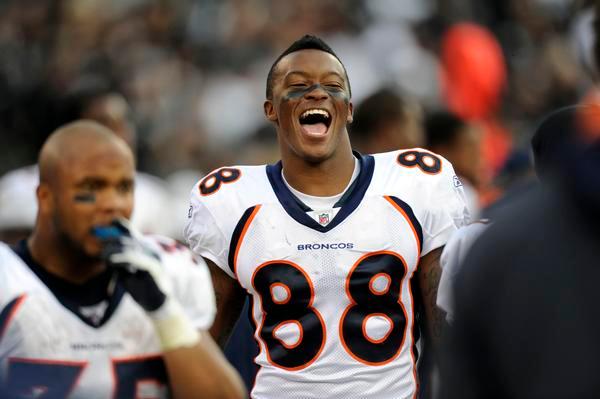 Cindy Trollinger looked for the voice. Her eyes eventually landed on a tall, handsome man seated in the Jing Denver reception area, waiting for his takeout order.

“Oh … thanks,” she said, initially dismissing the stranger.

Nice jersey? Ha! Her hair was a mess. She smelled like her granddaughter. Cindy had pulled Demaryius Thomas’ No. 88 from the closet at the last second, a fashion Hail Mary on the way to Grandma duties. She’d never intended to be out in public. She sure as heck didn’t think she’d be hopping over to Jing for Happy Hour.

Nice jersey? Sure, pal. And out the door she went.

It was then that her husband, Paul, trailing, took a quick look back. His eyes got wide.

“Cindy, Cindy, come back,” he said, stopping her mid-stride. “That is Demaryius Thomas.”

She turned around, peered into the dim light and looked at the handsome man again. Oh my gosh!

“I am sooooo sorry,” she said to Thomas, who grinned and rose from his seat.

Trollinger is the board president of Bountiful Hope Foundation, a non-profit organization that focuses on youths — and orphans, specifically — in the African country of Lesotho. She knew D.T. and Broncos teammate DeMarcus Ware had recently returned from a junket to South Africa.

But it was when Cindy mentioned Bountiful Hope, the mission and the mantra, that Thomas’ ears really perked up.

“Can I do something?” he asked.

Hello, Cindy, it’s Demaryius, wanted to text you so you have my number … I’m in Arizona right now rehabbing but will be back … Would love to meet …

She’ll miss the texts. And the smiles. Lord, that smile. Denver averages 300 days of sunshine a year. D.T. averaged 360.

“It makes me truly realize how much of a gift it was to know him,” Trollinger said of Thomas, who was found dead at his Georgia home last week at the age of 33. “It is just sinking in what a gift to have been able to call him a friend.”

As friendships go, it was beautiful. During Week 13 of the 2017 season, Thomas made good on his word, repping Bountiful Hope, repping all those orphans, as part of the team’s “My Cause My Cleats” initiative.

The left shoe, a red and purple number with white shoelaces, initially posted for $70 on the NFL’s online auction site. It went on to fetch $250 for Bountiful Hope.

“Demaryius stopped to take time to see, notice, and visit with ordinary people,” Trollinger said. “This is what is so special about Demaryius, and makes me cry with tears of gratitude.

“He took time to embrace the ordinary. I zoomed by Demaryius in such haste and did not notice him. He, however, reached out and noticed us. And took his time to care. He ended up representing the small, little country of Lesotho on his (cleats). And when the orphans of Africa found out that a high-caliber player made their small, impoverished country visible on national TV, they felt seen and cared for in ways that changes lives. It gave them hope.”

As Broncos Country celebrates the life of one of the greatest ever to wear the Orange and Blue on Sunday at Empower Field, that’s the legacy, isn’t it? Hope. On the field and off. Hope that a short slant from Tim Tebow can walk off the Pittsburgh Steelers. Hope that a kid born on Christmas Day, whose mother and grandmother went to prison for dealing drugs, could somehow rise above a family’s demons.

“He never got over leaving Denver,” Trollinger said of Thomas, who remained a confidant even after being traded to Houston in October 2018. “He had so much passion for the Broncos. He lit up that field as he lit up so many people’s lives by his smile, and by just being Demaryius.

“It’s hard, as a fan and a friend, to say good-bye to such a light among us.”

Even as D.T.’s NFL light faded, his relationship with Cindy and Paul never did. Thomas vowed to visit Lesotho in person, to hug and to play with those orphans he’d read so much about.

Alas, almost every time the three made plans, God laughed. Meetings got scheduled. Meetings got canceled. One, slated for February 2019 in Denver, was postponed after Thomas became involved in a single-vehicle rollover crash on Auraria Parkway.

“I know he was having medical issues from his accident,” Trollinger said. “He always was hopeful, even though (he was) facing some seizures.”

Happy Valentine’s Day Cindy … You’re just (too) kind and sweet … I really appreciate everything you’ve said and done for me … I actually get in town for a couple days … it would be good to see you, go over some stuff I can send …

I just love seeing ppl happy … so I feel ppl feel me when I walk in a room, so I always smile or in a great mood … so my energy can rub off to others …

When you put that No. 88 jersey on, think on that. And wish the angels luck in trying to catch what the Steelers never, ever could.

“Demaryius did not forget to stop and pick up the ‘pennies’ in life,” Trollinger said. “Many people walk over pennies as they feel they are of no real value. Demaryius was an exception to that.

“What can D,T,’s legacy teach us all? That every life matters. Especially the most vulnerable and unseen souls. Demaryius saw, and would wish in this Christmas season, that we all do the same.” 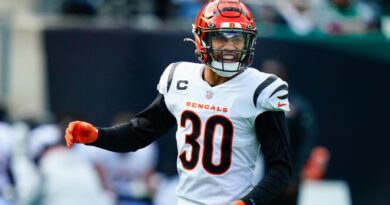