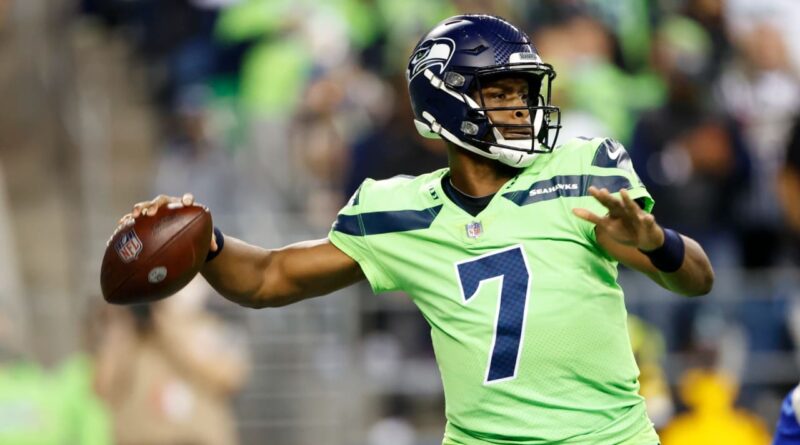 Journey’s “Don’t Stop Believin'” blared from the Lumen Field speakers during Thursday night’s bout with the Los Angeles Rams, imploring the hometown fans not to give up even though star quarterback Russell Wilson was forced to exit the game with a hand injury. The music choice could have been directed at backup ﻿Geno Smith﻿ as well.

Hold on to that feelin’, Geno.

On Thursday, Smith finally got his chance to show he wasn’t a washout clipboard holder, a friendly face meant not to threaten Wilson’s standing.

If there were rust on Geno, you’d have been hard-pressed to find it. The Seahawks came out firing from their own 2-yard-line, trailing 16-7, with one quarter of football to play. Smith completed all five of his attempts on his first drive for 72 yards and a TD and added a six-yard run for good measure. It was Smith’s first touchdown pass since Week 13, 2017.

It was a fever dream watching the former New York Jets second-round pick dice up the Rams defense like it hadn’t been years since he played meaningful football.

“I went right to Geno afterward and just said, ‘You know, you’ve been waiting a long time for your opportunity, and the faith that you’ve shown in our program and in us to stay with us, I was so proud,'” coach Pete Carroll said after the game, via the team’s official website.

After the Seahawks defense finally forced an L.A. punt on the ensuing drive, Smith got a chance to be the hero. Unfortunately, ﻿Tyler Lockett﻿ fell on the first snap of the drive, and Smith was intercepted, squashing any comeback hopes. The Rams went on to win, 26-17.

It was a brutal way to end, but the loss was probably the best one Smith has experienced in a long, long time.

“It would have been a lot better if we got a win, but it meant a lot, the city has embraced me,” Smith said. “This team has embraced me, and I’m really grateful for that. I appreciate all the fans. The atmosphere was just electric tonight. I mean, you could see it out there. Everyone was fired up. I really thought we had a chance. Thought we were going to come back and get it done; unfortunately we didn’t. But we’ll bounce back and get better.”

It wasn’t just that Smith was the caretaker of the offense after he entered. No, he was — stunningly — the engine. Making perfect throws, getting to the right reads, avoiding pressure. For a player trashed as unprepared and wobbly during his early years, it was a bizzaro-world performance from the QB. At the very least, it shows how much growth can still be done even away from the spotlight as a quarterback moves into his 30s.

“I thought Geno did an incredible job,” Lockett said. “We were on what, the 3-yard line and he drove us all the way down there. Shoot, he did an incredible job. That was a big-time drive, he was very patient, reading through everything, all his keys. He really did phenomenal, I was really happy for him. I told him I was proud of him the way he played. We all know he can play like that, and when he got his opportunity, he showed out, and I was just happy for him.”

Was Thursday night a one-off performance against a defense that let its guard down when the backup entered? Can Smith replicate the impressive showing? We might find out, depending on what further tests on Wilson’s finger show.

“He did great, he really looked good,” Carroll said of Smith. “He’s been working for that. He’s a talented football player, he knows our system. If Geno’s going to play for us some as Russ comes back, he showed that we’re in good hands.”

Hold on to that feelin’.

Chargers confident Austin Ekeler can step in, step up