Amazingly, the college football regular season is already starting to wind down, and the top three teams with the best chances to make the College Football Playoff are pulling away from the rest of the field.

While Alabama enjoyed its bye in Week 9, Clemson clobbered Florida State, and Notre Dame silenced Navy. So assuming those three teams finish their seasons without some type of catastrophic meltdown, their likelihood of making the playoff will only continue to increase.

Although their order and chances have changed, those three have consistently been among the top four teams with the best shots at the playoff, according to ESPN’s Playoff Predictor, since Notre Dame joined the party following Week 6. But that fourth spot remains the biggest question mark going into Week 10, and it’s evolved into a four-way battle among Georgia, Michigan, Oklahoma and Ohio State.

But let’s start with the current top four teams with the best chances to make the College Football Playoff, advance to the championship game and win it all, per ESPN’s Playoff Predictor.

Since the preseason, this is the first time the algorithm designed by ESPN Analytics has given anyone a better chance than Alabama to advance to the championship game and win it. Compared with last week, Clemson’s playoff chances are up from 89 percent, while its chances of getting to the title game and winning it are also up from 55 percent and 28 percent, respectively. Comfortably at the top of the ACC standings, the Tigers look like they’re on an easy path to the conference championship game, where they’ll face Virginia if the standings don’t change in the final four weeks.

Through eight games, Clemson is outscoring its opponents by about 31 points, and it seems like that number will only go up looking at the rest of its schedule. Saturday, Tigers take on Louisville, which is seriously struggling this season without Lamar Jackson and has yet to win an ACC game. After that, they’ve got Boston College, Duke and South Carolina – or, in other words, a fairly easy path to an undefeated season in a weaker conference. It seems like it will take a disastrous team malfunction to keep the Tigers out of the playoff.

However, on paper and in action, Alabama still looks like the scarier team, with a vicious offense led by Heisman Trophy favorite Tua Tagovailoa, who has yet to throw an interception this season. Alabama is averaging more than 54 points per game – the best in the country – and a whopping 564 total yards per game, which is second to Houston. Sure, its defense isn’t what it was last year, but that doesn’t seem to matter much when Tagovailoa can lead the team and run up the score.

Alabama’s Playoff Predictor numbers took the tiniest hit during its off-week, with its playoff chance dropping from 85 percent, its shot at the championship game dipping from 60 percent and its likelihood of defending its title shrinking from 39 percent last week. Still, that’s second-best all around.

The Crimson Tide’s bye week came at the perfect time ahead of what will likely be their most challenging game to date against No. 4/4 LSU. It gives Tagovailoa a chance to recover from the knee sprain he’s been dealing with the last few weeks, and the team had an extra week to prepare before heading to Death Valley. This weekend’s game is a fight for control of the SEC West, but even if Alabama suffers an upset, it seems likely it will still get into the playoff as a one-loss team just like last year. 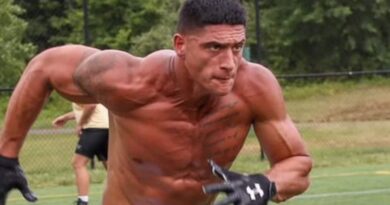