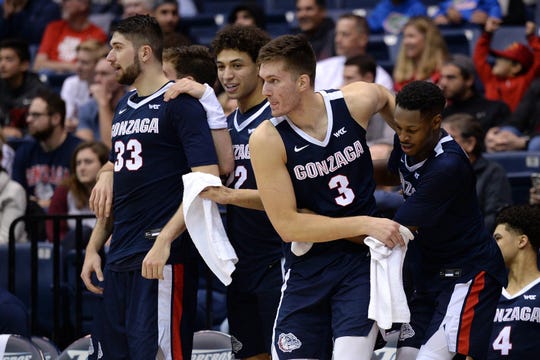 Gonzaga players react from the bench during the second half of the team's game against San Diego at Jenny Craig Pavilion. (Photo: Orlando Ramirez, USA TODAY Sports)

Another week of upsets all across the college basketball landscape produced a slew of changes in the USA TODAY Sports coaches poll. The shuffling didn’t make it all the way to the top, but the gap is closing.

Gonzaga is No. 1 for the fifth consecutive week. The Bulldogs received 19 of 32 first-place votes. But No. 2 Baylor drew significantly closer. The Bears were first on the other 13 ballots cast and finished just four poll points behind the Zags.

The rest of the top five looks totally different, with the teams ranked third through fifth last week each losing twice. Kansas is back up to the No. 3 position this week, followed by No. 4 San Diego State, the last undefeated squad in Division I. Louisville vaults to No. 5 on the heels of Saturday’s win at Duke. The Blue Devils, who had also lost at Clemson earlier in the week, slip five spots to No. 8.

Auburn lost its first two games of the season and slid 12 positions all the way to No. 16. Butler, which dropped games to Seton Hall and DePaul, fell seven places to No. 12.

Florida State continues its upward mobility checking in at No. 6, and Dayton climbs four spots to No. 7 after a big Atlantic 10 road win at Saint Louis. Michigan State is back up to No. 9, and Seton Hall cracks the top 10 with the biggest jump of the week. The Pirates rose eight places after a pair of victories, including the midweek triumph at Butler.

Ohio State and Michigan, both in the top five earlier in the year, fell completely out of the Top 25 this week, replaced by a couple of other Big Ten members. Illinois, tied for 22nd with Wichita State, enters the poll for the first time since December of 2014, and No. 25 Rutgers is ranked for the first time since USA TODAY took over the coaches poll in the 1991-92 season.

No. 21 Arizona is back in the rankings, and No. 24 Houston makes its season debut following its big win against Wichita State. The other dropouts are Colorado and Stanford. 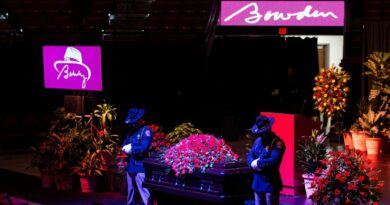 Cardinals QB Kyler Murray following contract extension: ‘This is where I want to be’