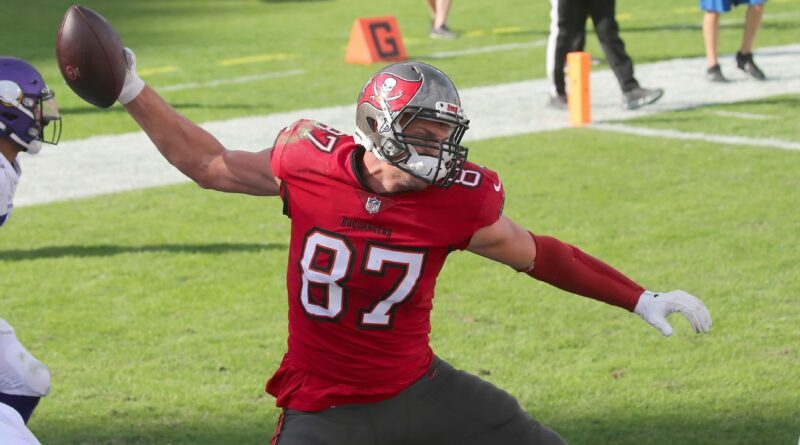 BOSTON — Tampa Bay Buccaneers tight end Rob Gronkowski said Tuesday that his retirement is final and that he is now focused on business ventures with his family.

“Love the game. Definitely blessed with all the opportunities the game of football has given me, and relationships — obviously here in New England Patriots for nine seasons and down in Tampa for two. But done with football and stepping my feet into the business world, business ventures, and just seeing what’s out there and where I can find my place.”

Gronkowski called the Bucs on June 13, just after the team’s three-day minicamp wrapped up, to notify them of his plans to retire and made his public announcement June 21.

The event Gronkowski was part of Tuesday was sponsored by his brother Chris’ company, Ice Shaker, which Rob Gronkowski said he plans to be involved with now that he is done playing.

When asked about his agent, Drew Rosenhaus, saying it might be hard for Gronkowski to turn down Tom Brady if Brady asked him to return to football, Gronkowski said that won’t be happening.

“Drew is No. 1 football agent out there, and he loves anything that has to do with the NFL and loves to see his players always playing,” he said.

“I would answer, obviously, the greatest quarterback of all time. Ask him how he’s doing. Tell him I’m doing good. But I wouldn’t go back to football — no.”

Gronkowski, 33, had previously retired after the 2018 season with the Patriots because of injuries. He largely credits Brady for setting the expectations for his career, and it was Brady who summoned him out of retirement in 2020 to play for the Bucs.

Information from ESPN’s Jenna Laine was used in this report.