The quest for the Heisman is now a two-horse race, and neither Tua Tagovailoa nor Kyler Murray appear to be slowing down.

Tagovailoa continues to lead the way in the weekly USA TODAY Network Heisman survey. The Alabama quarterback was named by all 16 official Heisman electors who work for the USA TODAY Network and was picked first by all but one. His passer rating of 238.85 actually took a slight dip this week, though it would still be an NCAA record if the season ended today. Heading into the Crimson Tide’s bye week before their huge showdown at LSU, he has a 70.4 completion percentage with 25 touchdown passes and no interceptions.

Murray was the only other player to get a first-place mention along with 13 seconds. The Oklahoma quarterback’s passer rating of 224.90 is also quite impressive. He also has 25 TD throws and another five rushing scores.

WINNERS AND LOSERS: Highs and lows from college football's Week 8

BOWL PICTURE: Who is already eligible? Who is close? Who is out?

Jonathan Taylor of Wisconsin, the nation’s rushing leader, is now a distant third. Ohio State quarterback Dwayne Haskins slipped to fourth following the Buckeyes’ loss to Purdue. Washington State’s Gardner Minshew II, who leads the nation in passing yardage at 392.1 per game, received a couple of mentions on the heels of the Cougars’ win against Oregon.

The defensive side of the ball is also represented this week with Houston lineman Ed Oliver and LSU linebacker Devin White each getting a point. 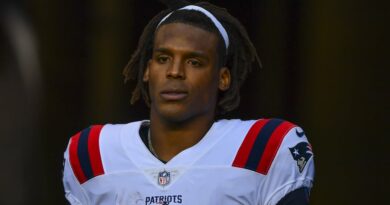 Patrick Mahomes confident deal will get done in time