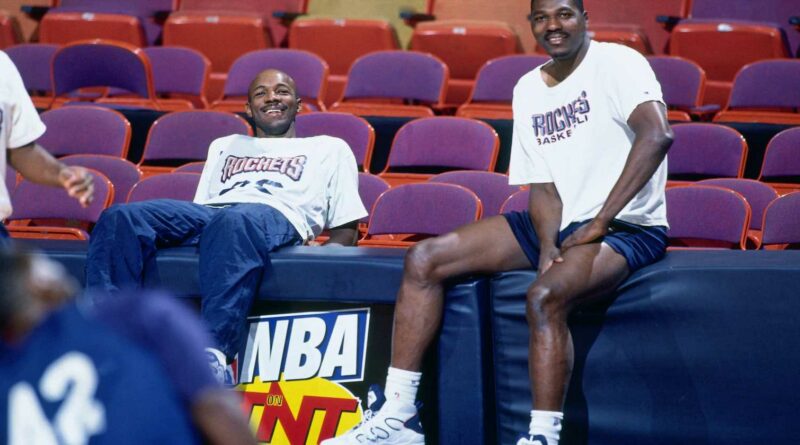 Houston’s Phi Slama Jama of the 1980s was a spectacle with Clyde Drexler, Hakeem Olajuwon and a high-flying Cougars team.

“The reason we dunked so much was not because we were trying to be flashy,” Drexler told USA TODAY Sports. “We wanted to be efficient. Efficiency won games. The dunk was very efficient. All we did was defend, block shots and we’re going to run it and if we run it, we’re going to have a chance to get a few dunks.”

Those dunks – and not just from Drexler and Hakeem – were spectacular at a time when men’s college basketball was exploding in popularity.

Coming out of the Magic Johnson-Larry Bird NCAA tournament final between Michigan State and Indiana State in 1979, the men’s game took off in the 1980s with a combination of great teams, great players and great coaches.

After watching Phi Slama Jama make 3 Final 4 appearances when I was a kid, I never thought it’d take another 37 years to get back there —- but so proud of this group to do it after losing Caleb Mills & going thru a Pandemic. No Akeem to carry them – but they did it!!!#GoCoogspic.twitter.com/or4qXIdiHL

“We recognized how special it was at the time because (Houston coach) Guy Lewis was one of those coaches who would let you know what his intentions are and what his goals are for the season,” Drexler said. “One of his favorite sayings was, ‘Hey guys, I’m going to the Final Four whether you’re going with me or not.’ He would start off the fall program with the statement. We had a common goal as a team to make it to the Final Four and hopefully win it. He, in no uncertain terms, set the tone every year.

“We were lucky enough to go to the Final Four three straight years. That’s pretty phenomenal. Not many universities are going to have that opportunity. Even though we didn’t win, they still talk about us today as one of the greatest college teams ever.”

“Now that these guys are back in the Final Four,” Drexler said, “it tells you a lot about how that program was rebuilt and what the aspirations are for that program.”

Houston’s run has made memories fresh again for Drexler who admitted that he follows the college game passively because “I love the NBA and the college game is sometimes a little too slow for me. … unless the Cougars are doing abnormally well, which is the case this year, and you get into more and more.”

“Sometimes, they’re on Saturday and you know on Saturdays, I’m playing golf,” he said. “I’ll make sure I watch today. It’s a wonderful thing for the city. Those guys are playing extremely hard, and they’re having a lot of success. We’re rooting for them. Hopefully they can get to the Finals and win it all, which we would be phenomenal for the city. Everybody’s had a tough year. This would make it a little bit easier.”

Where the College Football Playoff stands after Week 14