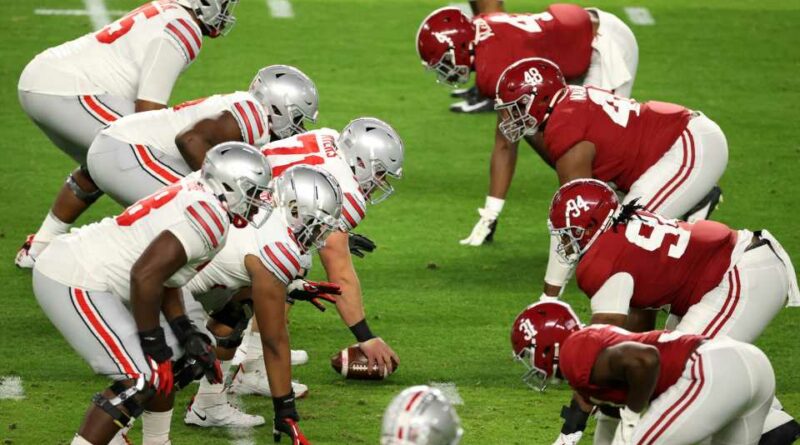 What would a 12-team College Football Playoff look like?

Yahoo Sports reported Tuesday that there is increased momentum toward the possibility of a 12-team CFP in the future. That’s going to reheat the expansion talk within the sport, but it’s important to take a look at how that might shake out based on past results.

Take the 2020 season, for example. It’s not a perfect sample given the impact COVID-19 had on the season, but you can see the allure (and perhaps potential failure) of a 12-team setup by looking at that bracket.

Here is a look at the 12 teams that would have made the College Football Playoff in 2020 based mostly on the final CFP rankings:

Notice we said, “mostly on playoff rankings.” Assuming the 12-team format would give automatic berths to Power-5 champions, then Oregon, which finished No. 25 in the final CFP rankings, would bump Coastal Carolina, which finished No. 12 last season after an 11-0 season. Yeah, this model has flaws, too.

What are first-round matchups in 12-team CFP?

The first round would have given byes to Alabama, Clemson, Ohio State and Notre Dame, which lost the ACC championship game to Clemson. It’s likely Oklahoma and Oregon, the other Power 5 champions, would have had higher seeds. Sticking to the script, however, here is the playoff schedule.

This format would call into question conference championship games because it still allows Florida, Iowa State and Notre Dame in based on last year’s results.

On the flip side, a Georgia-Cincinnati first-round matchup would have been even better than last year’s Peach Bowl matchup knowing the Bulldogs who opted out of that game might have played.

Let’s say the chalk held. Here would be the quarterfinal matchups:

Eight-team Playoff proponents would say, “Just start there instead.”

Even though the Pac-12 champion is excluded, those were the most-talked about teams in last year’s playoff discussion. Maybe the top four teams get through. Maybe they don’t.

The problem is eight teams still doesn’t include all five power conferences. Perhaps that is why the 12-team model is gaining the most momentum among the expansion plans.