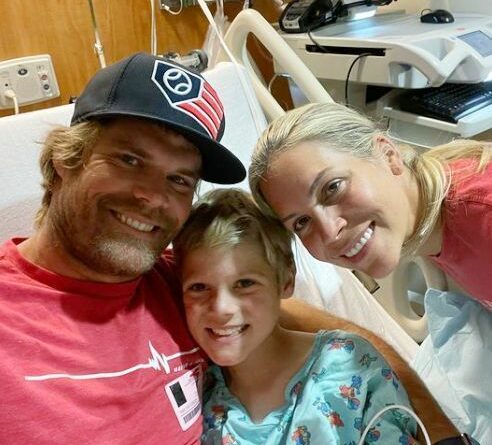 CHARLOTTE, N.C. — Greg Olsen glanced out the front window of his South Charlotte home and saw his 8-year-old son, TJ, kicking a soccer ball against the wall with his twin sister, Talbot.

“You know, it’s just remarkable how resilient these kids are,” the recently retired Carolina Panthers tight end said. “And what these doctors can do is remarkable.”

Just three weeks earlier, TJ had undergone a heart transplant at Atrium Health Levine Children’s Hospital. The Olsens have raised more than $5 million for the Charlotte-based facility since their son was born with congenital heart disease in 2012.

Greg and his wife, Kara, always knew that TJ would need a transplant. They just hoped it wouldn’t be this soon.

They weren’t prepared for what followed when they walked into Levine on May 24 thinking TJ, who had three open-heart surgeries after being born with half a heart, was fatigued from a busy schedule of late-night baseball games and a family wedding.

“Within a few hours, we were in the ICU, and he was in heart failure,” Greg said.

Four days later, TJ was on the transplant list.

At that point, Greg’s 14 NFL seasons and celebrity status could not help speed up the donor process.

Dr. Gonzalo Wallis, the medical director of the pediatric transplant program at Levine, made that clear.

“There are certain things that we can fudge,” Wallis said. “That is not one of them.”

‘His heart is reaching its end’

Greg’s first social media post on TJ’s condition came May 24. The second paragraph said it all: “Unfortunately, it seems his heart is reaching its end.”

From that point on, Greg kept not just friends, family members and fans updated regularly on TJ’s condition. He kept the world updated via social media.

“The coverage and just the mentions have spanned across the nation and even internationally,” said Savannah Simons, the clinical communication strategist at Atrium Health.

Wallis and Dr. Joseph Paolillo, the chief of pediatric cardiology at Levine, saw the outpouring of support even though they did their best to avoid social media. Paolillo said it was an “uplifting experience” since it raised awareness about the most common birth defect in children.

“It’s a very emotional experience for everyone involved,” Paolillo said.

Not all celebrities are comfortable sharing family struggles. Greg has been sharing TJ’s story since his son’s heart problem was discovered before he was born, wanting to put a face on the defect and subsequent treatment plan.

“Everyone nowadays is so willing and happy to share all the positives, right?” Greg said. “Your kid’s home run and your kid’s graduated from college and a job promotion, touchdown.

“But the reality is, there’s a lot of people out there that are going through stuff. To have our story out there and get the traction that it did puts a humanity on all this. … And we’re comfortable with that.”

Several years ago, during a regular visit to the hospital, Greg began a relationship with a child the same age as TJ. That child had to wait nine months for a transplant. He was there so long he became known as the “mayor” of the hospital.

Because of the experience, one of the first questions Greg asked Wallis about TJ’s transplant was: “Am I going to wait as long as [they did for] their child?”

Wallis reminded Greg that the transplant process is transparent and made “so that nobody can skip the line.”

The fact that he helped open the HEARTest Yard Congenital Heart Center at Levine — the very unit TJ needed — by donating $2.5 million? That didn’t matter either.

“People think that you can buy yourself organs and buy yourself to the front of the line,” the three-time Pro Bowl selection said. “And it just couldn’t be further from the truth.”

Depending on the region of the country, the line can be long. In Seattle, where Greg spent the 2020 season with the Seahawks, the wait can be six months to a year. In New York City, it can be up to six months.

Charlotte, because it can feed from several densely populated areas within a 400-mile radius, is considered a “good market” for transplants. The average for children of all ages is 51 days for the highest priority.

“He said, ‘Listen, guys. I’ve gotten calls within a day. And I’ve gotten calls over a year,'” Greg said of the conversation with Wallis. “He was, ‘I can’t tell you how long it’s going to be. What I can tell you is TJ is big. He has all his other organs … all the other markers for positive outcomes are really good. His heart is failing, but the rest of his body is very healthy.”

TJ got a match in eight days, significant for Greg because he wore No. 88 during his nine seasons with the Panthers. The Olsen’s family priest called it a “wink from God.”

“We had a lot of little winks,” Greg said.

It also helped that TJ was placed on the national heart registry near the Memorial Day holiday weekend, Wallis said.

“Like everything in life, it’s around holidays when people have accidents,” said Wallis, shedding light on the reality of transplants.

What most outside the hospital didn’t know was that three other children had heart transplants and another a kidney transplant from anonymous donors during a five-day span around which TJ had his surgery.

“So there were a lot of families from all different backgrounds, all different walks of life,” Greg said. “We were all walking our kids around the hallways and stopping outside each other’s rooms to check on how recovery was going.

“It was a pretty crazy time there for a handful of other families just like us.”

It also was hectic for the medical staff.

“My team worked for three days straight,” Wallis said. “And nobody said a peep.”

As Wallis detailed those moments, Levine facility executive Callie Dobbins wiped away a tear, a reminder that this was an emotional journey for the staff as well as the families.

“It’s just breathtaking,” Wallis said. “I come from a Third World country that if somebody was born with congenital heart disease, there’s nothing I could have done.”

‘Not even done yet’

Four days after the surgery, Greg posted a 12-second video of TJ from his hospital bed.

“Hi everybody,” TJ said in a soft voice. “Thank you for thinking of me. Thank you for praying with me. We love you guys, bye.”

“Doing this is like riding a tightrope,” he said. “And if you add social media to it, it’s like lighting the tightrope on fire. We were just focusing on the care of the children and not worrying about any other noise.”

But the noise around the country was loud.

“There are certainly other family members of celebrities that have issues like this that aren’t made public,” Paolillo said. “But this seems to be, and maybe it’s because we’re living it and we’re part of it, so much longer lasting, the impact.”

He said it reminded him of when late-night talk show host Jimmy Kimmel announced in 2017 that his son had been born with a congenital heart defect that required multiple surgeries.

“It sort of faded, but this isn’t fading yet,” Paolillo said. “I think it’s the personality weaved in with the story.”

Greg, now an NFL analyst for Fox Sports, doesn’t plan to disappear. He told Wallis and Paolillo he’s “not even done yet” in his quest to raise awareness for what TJ is going through — and what could be next.

Patients like TJ who have had a heart transplant can face complications such as rejection of the organ or infections. Also, transplanted hearts don’t last forever. On average, a transplanted heart can last 17 years in children, according to Atrium Health’s Simons.

Exactly what’s next Greg can’t say. His journey is as uncertain as the one TJ faces, although Paolillo put being an advocate for organ donors on the table for him.

“I would never change the lives it’s enabled us to touch, the programs we’ve started, the doctors it’s helped hire, the stories we hear.”

Scattered on the front porch when TJ returned home on June 16 were 35 signed college football helmets from college coaches, many of whom Greg has never met.

This was part of what Wallis likes to call the “happy ending” to the story that really hasn’t ended because of ongoing medical needs.

“I don’t know where we’re going to put them all,” Greg said of the helmets. “They come by the day. Our garage was full of stuff. It was overwhelming for a while.”

But nothing was as overwhelming as having to wait 16 hours from the moment TJ went into surgery to see him again.

And nothing was as rewarding as looking out the front window and seeing TJ kicking a ball with his sister.

“Just a roller coaster of emotions each day of recovery,” Greg said. “There’s ups and downs. You just try to keep moving forward.”