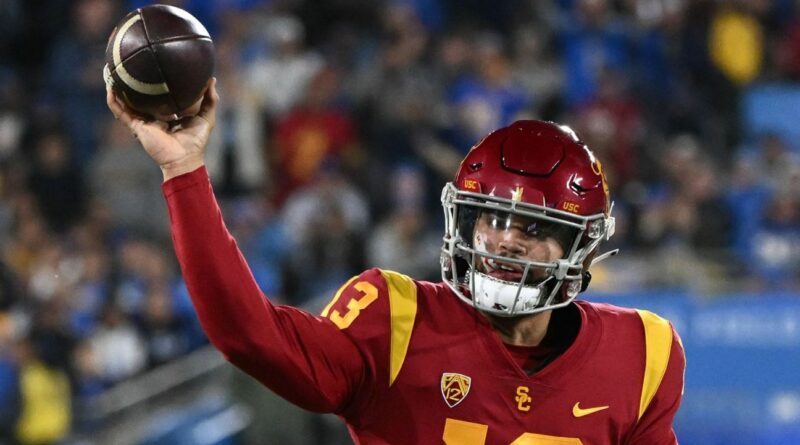 PASADENA, Calif. — All season long, USC coach Lincoln Riley has made it a point — after a win, a loss, a practice — to mention where the team was just a year ago as compared with where it is now.

Even after USC dropped its first game to Utah on the road by one point, Riley mentioned how far the program had come in a short time. It had taken the Trojans just five games to surpass last season’s four-win total. That night in Salt Lake City, Riley also stressed another point: Despite the loss, all of the Trojans’ goals would still be attainable if they kept winning.

On Saturday night, one of those goals was accomplished. A season after losing to rival UCLA by nearly 30 points at home, USC outlasted the Bruins 48-45 in an electric, back-and-forth thriller that punched the Trojans’ ticket to the Pac-12 championship game in Year 1 of the Riley era and kept their College Football Playoff hopes alive.

“Iconic type of game,” Riley said. “Whether you’re a USC fan or a UCLA fan, they won’t forget nights like that.”

The first ranked matchup between the two teams since 2015 delivered on nearly every level. After UCLA raced to a 14-0 and led 21-20 at halftime, the game became a pingpong match of touchdowns in the second half. Whatever quarterback Caleb Williams could do on one end, Dorian Thompson-Robinson would answer on the other end in emphatic fashion. Both threw interceptions — three plus a fumble for Thompson-Robinson, one for Williams — but tried to erase their mistakes with dazzling drives, Houdini-like scrambling and pinpoint touchdown tosses.

But the high-scoring affair promptly ended on a defensive play. As Thompson-Robinson drove down the field to try to tie or win the game with less than two minutes left, he was intercepted by sophomore Korey Foreman.

“I came into this game expecting a dogfight,” Williams said. “The game is never over in these big games.”

The teams combined for 93 points, five turnovers and more than 1,000 yards of offense, and no player was responsible for more of those yards and scores than Williams, who passed for a career-high 470 passing yards and two touchdowns and rushed for 33 yards and a TD.

“He’s been one of the best players in the country this year,” Riley said of Williams.

As USC offensive lineman Brett Neilon added, “He’s so competitive, and he’s so confident in himself, but not in a cocky way. He’s just an A-plus guy.”

Earlier this week, Williams said he wanted to treat the matchup with UCLA like another game. There was no extra motivation or animosity toward the Bruins. But after the game, the elation that players, coaches, and staff displayed spoke of something different that had been missing at USC the past few years: success, opponent notwithstanding.

It was fitting then that Saturday’s victory celebration occurred in the same south end zone where USC last celebrated its best moment before this one: the 2017 Rose Bowl win over Penn State.

The win affirmed that USC’s offense is one of the most explosive in the country and that Williams is a Heisman Trophy contender, if not the front-runner. The Trojans’ defense has been inconsistent but also timely when it comes to forcing turnovers and making stops.

The game also was an exhibition of USC’s confidence. Having gone down by two scores early in the contest after leaving points on the board, there was, as Riley put it, zero flinching.

“You can’t write the script first,” Riley said. “You just got to be ready to respond.”

After a disappointing loss in Utah, Riley was almost overly confident that USC would respond from the lowest point of its season. As his players rushed the field at game’s end on Saturday, the feeling of accomplishment spanned beyond beating their rivals. It also was about the fact that, in the span of a year, the Trojans had managed to stitch a team together with a new coaching staff, a bevy of transfers from different corners of the country and plenty of players who had been at USC for several years into a cohesive, successful team capable of playing for conference titles.

Among the things that USC accomplished Saturday was keeping a West Coast team in the playoff hunt. There’s still work to do — the Trojans have to beat a surging Notre Dame squad next week and win the Pac-12 championship — but for a conference and a region that has failed to make its way into that top four as often as its counterparts, Riley’s revival of USC projects a brighter future that is already paying dividends.

“Thinking back to what all got here, the main thing that we wanted to do was come together,” said USC linebacker Shane Lee, who transferred from Alabama. “That’s why we’re here, to play for championships and have success.”

Both Williams, who is still getting used to wearing cardinal and gold and leading the band after a win, and players like fifth-year senior lineman Andrew Vorhees, who has seen all the ups and downs of the past few years, basked in the win as they hugged teammates and high-fived USC fans who didn’t want to leave. Athletic director Mike Bohn embraced Riley, who then watched the celebration removed from the crowd, taking it all in.

“College football on the West Coast and here in L.A. is alive and well,” Riley said postgame, praising the atmosphere of what was a sold-out crowd of more than 70,000 at the Rose Bowl. “That’s how it should be every week.”

Jarvis Landry: ‘It’s been a breath of fresh air to be back home’ in New Orleans

Saints reportedly close to 1-year deal with Jameis Winston; what does that mean for Taysom Hill?