Here are the injuries we’re monitoring on the eighth Sunday of the 2018 NFL season:

Eagles cornerback Jalen Mills was carted off with a foot injury in the third quarter, safety Barry Church left in the second half to be evaluated for a concussion, and linebacker Kamu Grugier-Hill (thumb) exited in the first quarter.

2. Cincinnati Bengals defensive end Carl Lawson is doubtful to return after suffering a knee injury against the Tampa Bay Buccaneers. Offensive guard Clint Boling is questionable after suffering a back injury in the first half.

3. Washington Redskins left tackle Trent Williams is questionable to return against the New York Giants after suffering a thumb injury.

4. Denver Broncos linebacker Brandon Marshall suffered a knee injury in the second half against the Kansas City Chiefs and is doubtful to return. Wide receiver Emmanuel Sanders is probable to return after suffering a shoulder injury.

5. New York Jets tight end Neal Sterling has been ruled out after being evaluated for a head injury in the first half.

6. Giants right tackle Chad Wheeler is questionable to return in the second half against the Redskins with an ankle injury.

7. Buccaneers running back Ronald Jones has been ruled out against the Bengals after suffering a hamstring injury.

8. Pittsburgh Steelers cornerback Coty Sensabaugh is questionable to return against the Cleveland Browns after suffering a foot injury.

9. Chiefs linebacker Anthony Hitchens is doubtful to return against the Broncos with a rib injury. Linebacker Frank Zombo is out with a hamstring injury.

Despite the win, Tom Brady’s frustration with the Patriots is on point 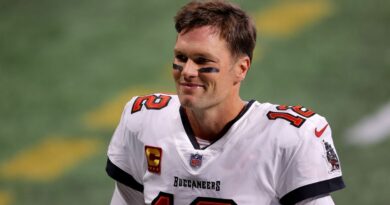